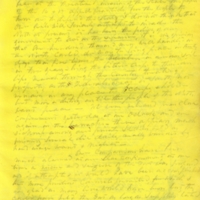 Fuller opens letter 5 describing the fear of the North about threats to Pennsylvania. He doesn't think the South will invade at present. They were released from close confinement, and he reports that the health of other Confederate soldiers seemed extremely poor, with deaths daily. They learn that while in confinement, a rescue and seizure of the Fort was planned at one point, but not carried out.

The Pennsylvanians are [convulsed?] with fear at the threatened invasion of the state the paper of the 16 & 17 appeal franticly for the people to turn out to defend the State, I do not think that our Genls will seriously attempt to invade the North at present, it has been the policy of our government to act on the Defensive, it is my opinion, that one hundred thousand men well handled in the North could do more to bring peace in thirty days than five times the number on our own soil in two years- bring the bitter cup to their own lips, march through the country treating property as the Federals treat it South, not remain in any place to occupy & hold- but move & destroy until the people of the North want peace. We were released from close confinement yesterday at one Oclock and are again in the barracks. There appears much sickness among our private Soldiers held as prisoners, several die daily really worn out by hard usage want & neglect.

Our companions have been much alarmed at our close confinement, at one time a rescue and seizure of the Fort was proposed and if attempted it would have been accomplished but more prudent Counsels prevailed, for which I am glad as many lives would have been lost, they could have held the Fort as long as supplies lasted but in the end would have been compelled to surrender, we could not have fought our way through the country for want of arms if armed we might have joined Lees-