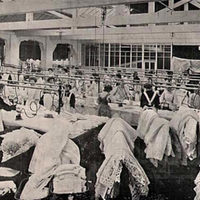 In industrial cities like Philadelphia, New York, Boston, Chicago, and Minneapolis, women worked in similar occupations as they did in the countryside, such as laboring from home. They sewed hats, did textile piecework, and made shoes. As in the countryside, urban home laborers tended to be married women with children. In contrast to the countryside, however, home laborers in cities were often poor immigrants. Their extreme dependence on the income from home labor made them targets of exploitation. (13)

Women also did work that would do at home in factories, such as working in laundries.