The United state during the early 20th century slowly pushed for the extermination of alcohol fueled by various groups and their ideas of how alcohol is a cause to alot of social problems in America. On October 29, 1919 The volstead act was passed which prohibited the sales of alcohol in a majority of the United States. The United States government thought of this law as one that would have a positive impact on society as a whole, as it would prevent the number of drunkards and various crimes and other negative effects that come from drinking alcohol. Although they did not predict the economic damages it would create. Alcohol has always been a  large industry in the United States. For the year 1914, the revenue collected in taxes from liquor alone was 226,000,000. (Ames. 264) By prohibiting these sales the United States economy would see large losses directly and indirectly from alcohol sales. Supporters of the prohibition expected an increase in the sales of other products such as other beverages like juice, soda, to replace the money made from alcohol sales, but this could not be further from reality. 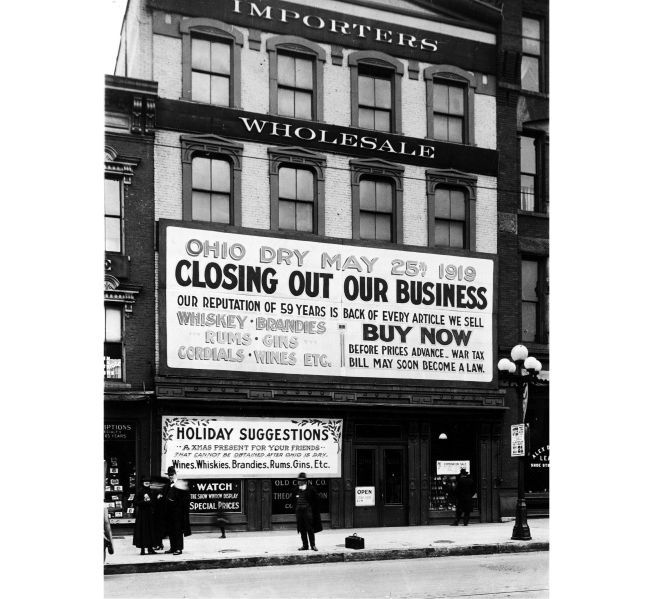 During this time there were various large alcohol producing companies in the United States. These alcohol producing companies consisted of large factories that were filled with thousands of workers. These larger companies would bring in millions of dollars in alcohol sales a year due to the constant demand of alcohol.  Since alcohol sales were now prohibited, these large companies would now have to shut down not only halting the revenue collected in taxes through alcohol sales but also put thousands of Americans out of jobs. But these companies were not the only ones hurt by the new law. Establishments that would strictly sell alcohol were shut down, creating even more loss in jobs and revenue in the economy. The Beareau of Internal revenue estimated that the prohibiton cause the shutdown of over 200 distilleries, a thousand breweries, and over 170,000 liquor stores.(Funderburg 9) The entertainment industries also experienced a loss in revenue. Movie theatres although expected to increase revenues found themselves losing them, from a result of not being able to sell alcohol. The money brought in through night life also saw a dramatic loss. Many bars had to shut down due to the fact their business was now considered illegal. Night clubs and dance halls which heavily depended on alcohol sales found themselves losing customers and revenue.

A new window of opportunity opened up during the prohibition that would cost the U.S. Significantly, the illegal production and sales of alcohol. Since it was not allowed to be produced and sold on the legal market Many Americans began to bootleg or smuggle alcohol throughout the States. (Blocker) . Alcohol was now being produced and sold illegally and untaxed by various groups across the country.  These alcohol producers would sell  alcohol to anyone and everyone who wanted it and was willing to pay. With the illegal mass production of alcohol they would need a place to sell their product, and it was not hard to find a buyer. There were multiple underground clubs that would purchase this illegal alcohol and sell it to its patrons, Many of these establishments had to operate secretly and be kept hidden from the police. There would soon be thousands of speakeasies that would pop up across the country. Since these establishments participated illegal sales of alcohol none of the transactions for alcohol were being taxed by the government which caused an even larger loss in revenues.

With the strict laws on alcohol and the flourishing of illegal production there was an increase in organized crime throughout the United States. The prohibition department in Washington presented that the amount of arrests made after the first six months of prohibition increased by 25 percent ( Edge 70) many saw this time as an opportunity to start their own business and make fast cash in the process. Crime syndicates also saw this as a golden opportunity and saw the power in being an alcohol producer and distributor. The government then had to spend more money to fuel the war against alcohol and other organized crime. The police force at the time was not enough to stop the production and sales of alcohol in the united states and therefore would need an increased budget. The amount of money used to enforce prohibition started at 6.3 million in 1921 and rose to 13.4 million in 1930, almost double the original amount. (Zwiebel 242) Some of the problems in stopping these syndicates were that they would often bribe or pay the police forces or political powers in order to ship and continue their production safely. The corruption during the time was a huge problem as the crime syndicates were essentially above the law. As long as there was corruption and the demand for alcohol in the united states there would be a never ending battle against the alcohol sales in the united states and a costly one at that.

Wheeler, Wayne B. "liquor in International Trade." The Annals of the American Academy of Political and Social Science 109 (1923) 145-54

Edge, Walter E. " The Noneffevctiveness of the Volstead Act." The Annals of the American Academy of Political and Social Science 109 (1923): 67-