Women and children accounted for two thirds of all immigration to the US since 1930. A surge of male immigrants in the early 20th century were followed by women and children in the following years, beginning in the late 1920s. Peak migration occured between 1900 and 1919, consisting mostly of men traveling by themselves. These men came primarily from southern and eastern Europe. During the second wave, consisting of mostly women, 82 percent of the women immigrating to join their husbands were migrating from Italy [1].

It was common for men to travel to the US in search of financial opportunities and a chance to send money back to their families overseas or to save money for their families in general. In the following years and decades, their wives and children would follow. [2]

Chain immigration, or the occurrence people migrating to a new country following others in their community, neighborhood, or family, was very common for the second wave of US emigration. Marriage was the most significant determination of migration in the second wave. [1] 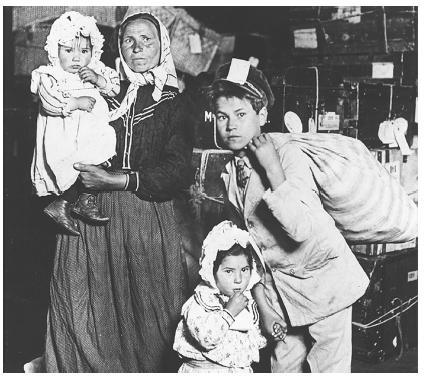 Occurrences of single mothers emigrating to the US also occurred but they were often included in the second migration consisting mostly of women. An immigrant mother in Washington was described to do just this in a Seattle Times article in 1932, though she is not identified. She told her daily routine of getting up early in the morning, doing house work, going to work, then coming home in the evening to care for her children. [4]

Women and children were given preference for immigration during the second wave of US migration beginning in the late 1920s. Although they were being welcomed into the country, it was primarily husbands who were given preference in obtaining citizenship. The woman described above could hardly hope for her and her children to obtain any citizenship without a man in the family. [1]

Contrarily, Native born women who married immigrant men could risk losing their US citizenship. Mixed relationships were common upon Chinese men considering the ban on Chinese immigration on the west coast. There was a very low population of Chinese women in the US and Chinese men often had relationships with natural born women or also prominently Polish women, who would commonly lose their citizenship status if they married. [3]

Children of immigrant families, even if their fathers were citizens, also had difficulty obtaining American citizenship. The status of ones Father or parental figures did not contribute to any specific legal definitions or actions needed in order to transfer citizenship to children. Often the men would gain citizenship, clearing a pathway for their wives to gain citizenship. [1]

Women immigrants, even those married to naturalized American citizens, still had difficult times becoming citizens. The end of 1920, suffrage had led to the 19th amendment and all naturalized women citizens could vote nationwide. This did not however open the voting booths to immigrant women regardless of their marital status. In trying to appeal to female immigrants, western American states were more quickly adapting to the suffrage movement and expanding the legality of divorce. These legislations were favorable among females and more female immigrants settled in more western states. [1]

Women and immigrant families came to the US in search of a better life for themselves and their posterity. There was ample opportunity for jobs in the US both for men and women. Immigrant women were creating a larger network of house keepers, maids, family cooks, and even factory workers. Single immigrant mothers were breadwinners for their families, much like the unidentified immigrant mother mentioned before. [2]

Immigrant children have contrasting childhood memories compared to native born children. Anna Zellick, a Slovenian immigrant growing up in Montana, recalls that her childhood was surrounded by immigrants from all over western Europe. "I didn't know the differnce", she recalls. In this time immigrant families were often flocking to the same neighborhoods. Zellick's father worked in a mine with other immigrant men. Native born people often worked in town, owning businesses and working government jobs. Immigrants did the hard labor here. [5]

Lawrence M. Larson was a young Norwegian immigrant boy growing up in the United states. At a young age, he did not connect with the Anglo-American comminuty. He did not have any appreciation for the Amerian people and he knew this was becasue he living a community of immigrants like himself. It wasn't until he began attending a public school with children from both native born and immigrant families that he saw how the two groups were able to interminlge with each other. [7]

Immigrant families were not only from Europe coming though Ellis Island. Mexican immigrants in the South Western United States made up a hefty chunk of immigrants in the early 20th century. Antonia Villamil de Arthur describes her life that is similar to European immigrants in other parts of the country. She lived with her family and moved to the United States as a child. She remembers living in a predominantly Mexican immigrant and Native American community. Her parents both died before she was fifteen, and by that point she had already been widowed with one child. Looking back, she views her young, orphaned motherhood as tragic. However, at the time, it was normal to her. Her mother was fifteen when she had her, other girls in her community were leavng school to be wives and mothers. It was normal. [6] 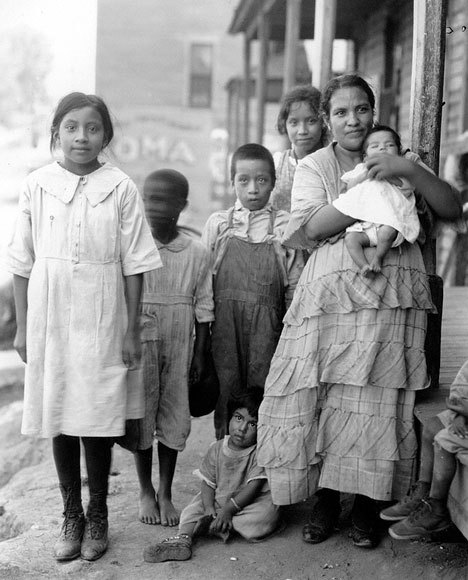 A Mexican immigrant mother poses with her 5 children, ranging from infancy to adolescent.

[1] Bredbenner, Candice Lewis, “A Nationality of her Own: Women, Marriage ,and the Law of Citizenship), University of California Press, 1998

← Immigration to the West: Immigration Implications Leading Up to the Great Depression
Immigrant Life: Home, Community, and Social Aspects →
Women and Children