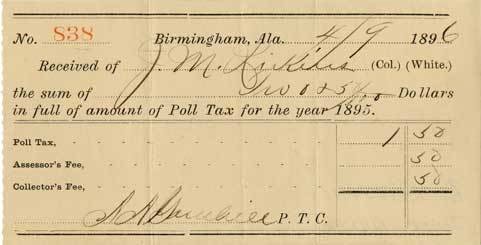 Citizens were required to pay a poll tax to register to vote. These fees restricted poor African Americans from voting. This receipt is from Birmingham, Alabama in 1896. The poll tax was for the entire year.

Jim Crow Laws were intended to deny black people their basic human rights. They were laws, customs, and etiquettes for how blacks should act in society and how people should treat newly freed slaves. They were more than simply laws, but a way of life. In denying them their rights, Jim Crow relegated the status of all African Americans to second class citizens, legitimizing anti-black racism and separation. Jim Crow Laws, also known as Black Codes, restricted where blacks could go, with whom they can interact with and how they were allowed to engage in society. Black Codes allowed for separate public and private entities for whites and blacks. This included drinking fountains, prisons, schools, public entrances, restrooms, churches cemeteries, hospitals, and beaches. These separations were often marked by signs stating which was for “Whites” and which was for “Colored” Some of the Codes are as follows: 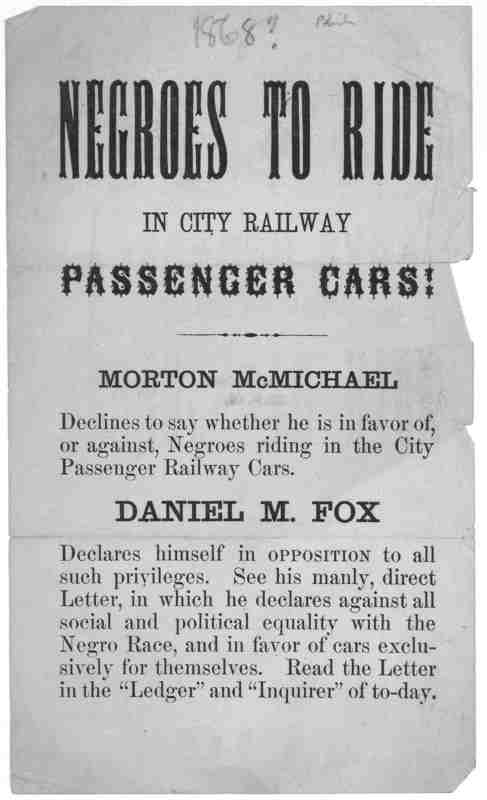 Morton McMichael declines to state whether or not he is in support of allowing freed slaves to ride in the City passenger railway cars. Daniel M. Fox states that he is in opposition of such privileges.

any body part to a white woman

2. Blacks and white are not to eat together

3. A black male cannot offer a light for a white female trying to light a cigarette

4. Blacks are not allowed to display affection for another in public

6. Blacks were called by their first name. they had to use courtesy titles when referring to whites

7. If in a car driven by a white person, a black person had to site in the back seat

8. White motorists had the right of way at all intersections at all times

9. Never assert or even intimate that a white person is lying

11. Never suggest that a white person is from an inferior class

The punishment for disobeying the Black Codes or any of the Etiquettes put forth by Jim Crow Laws was often far worse than imprisonment. Blacks had very little legal recourse, as the criminal justice system was white dominated. Whites could also physically beat a black person without facing any legal consequences. To disobey, meant one risked the loss of their home, their job, or even their life, and the lives of their family.  Many times, the consequence was lynchings. African Americans would be hung and shot, burned at the stake, castrated, beaten with clubs, or dismembered. The southern states accounted for 9/10th of the lynchings in the country. White supremacists believed that they were a necessary evil to teach blacks to obey the laws that restricted so much of their freedom.