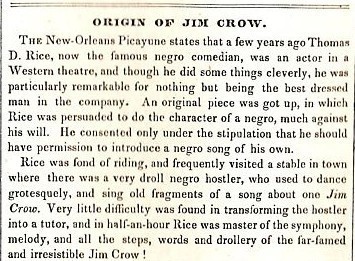 This is a description of how the Jim Crow Laws came into effect.

The phrase “Jim Crow” began in the 1830s, and continued into the 20th century post reconstruction, and culminated with the Civil Rights Movement in the 1950s and 1960s. The Reconstruction Era is from 1865 to 1877 and throughout those twelve years, African Americans went from being slaves to masters, to being slaves to the system and had to painfully jump through useless hoops proving their worth for nearly 80 years.  Race-based violence was extremely common throughout the South and parts of the North. Thousands of blacks, and sympathetic whites were lynched in the South and elsewhere in waves, which occurred periodically from the 1870s until the 1960s. Jim Crow Laws and Black Codes have impacts that stretch to the present although they are not as extreme as during Reconstruction. Jim Crow laws and the impacts were around long after the Reconstruction Era had died off, and that became a long road to be on for activists and abolitionists. One can believe that the unfortunate impacts of the Jim Crow laws stretch to today with events happening all of the time that have roots with race related violence and other issues. For these purposes, however, the focus is from post war, so 1865 to 1877 when the Reconstruction Era stopped and the 20th century could begin.

← What
Where →
Jim Crow
When