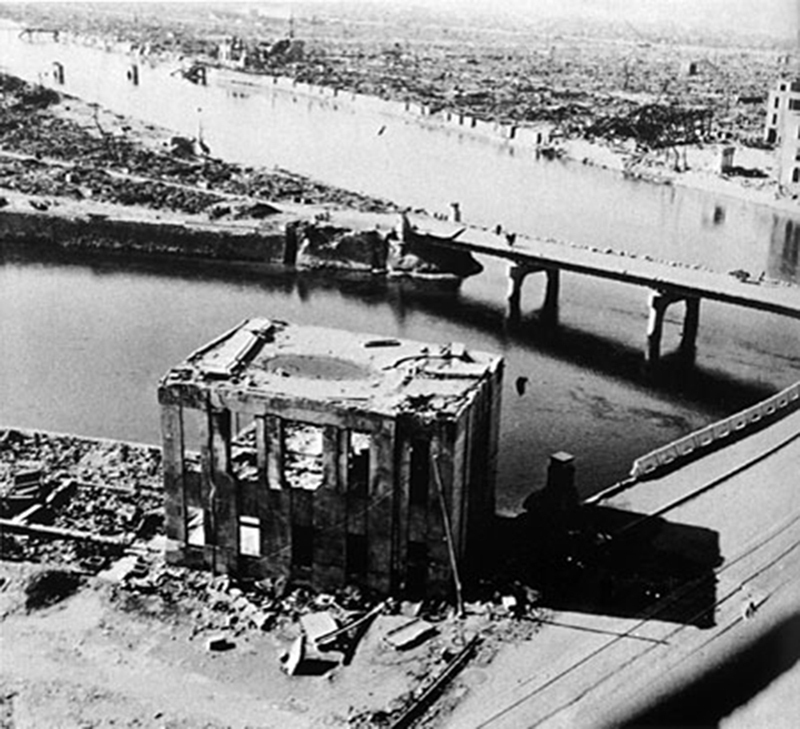 Aftermath of the atomic bomb at the center of Hiroshima. Photograph taken by the US Army and provided by the Hiroshima Peace Memorial Museum.

On August 6th, 1945, Hiroshima became the first city in world history to be bombed with a nuclear weapon. The attack came early in the morning, and most school children and industrial workers had already begun their commute to work. Just 45 minutes before the attack, an air raid warning had been called off due to a false alarm. This was a reconnaissance flight reporting the weather of Hiroshima to the main bomber group about to attack. American reconnaissance aircraft had become a routine sight for most Japanese civilians at this point of the war, and the small American formation flying overhead aroused no concern.  For most in the city, the explosion came without any warning.[1]

The B-29 Enola Gay dropped a single plutonium 13-kiloton nuclear bomb, unleashing a weapon with firepower equal to 13,000 tons of TNT. At 8:15 AM, 1900 feet from the ground, the explosion instantly turned thousands of people near the blast to ashes, leaving no traces of their existence other than black shadows etched into concrete and stone. The fireball reached a diameter of 1/4th a mile, and approached temperatures of approximately 10,000 degrees fahrenheit-as hot as the surface of the sun.[2]

The majority of victims within 1 mile of the blast center were instantly vaporized. Survivors often compare the flash of the explosion to 'a thousand suns.' Many citizens were permanenty or temporarily blinded from direct eye contact, and the concussive shockwave ruptered eardrums, rendering some deaf.[3]The nuclear blast tossed buildings, vehicles and homes hundreds of feet into the air, or outright flattened them. Building blocks, glass shards, shredded wood and other debris were thrown up and scattered across the city.

Near the instantly incinerated city center, survivors reported spontaneous firestorms occuring. This phenomena involves the sudden fires across the city drawing in an adequate volume of air to create "fire-wind," which reached approximately 30 to 40 miles an hour.[1] An area of approximately 4 square miles from the blast center was completely destroyed. The only buildings that managed to withstand the blast were either constructed of stone or concrete. Even if wooden buildings managed to withstand the explosion's shockwave, the fire that followed the blast quickly burnt them down. 90% of the remaining city was in ruin. [4]

The atomic blast caused multiple injuries, disabilities and diseases to the survivors of the blast. The heat wave that spread from ground zero seared exposed skin, burning and disfiguring people permanently. Many citizens found themselves crushed or trapped under their homes, unable to escape. The widespread fires that followed the explosion left many to burn alive in destroyed buildings. Burn victims were severely dehydrated, and most who could still move wandered around the city in search of water. The local rivers became flooded with the cooked corpses of desperate citizens who tryed to cool of or rehydrate at the shore.[5]

Far exceeding expectations of the Interim Committee in Washington, 142,000 people died in Hiroshima compared to the 20,000 estimate. The minimum death toll is calculated to be 80,000. Many of the regular residents of Hiroshima had been evacuated, making the estimated "present" population at the time of the bombing 340,000.[6]

Approximately 62,000 buildings and homes were destroyed. People near the blast center that were not instantly turned to dust were carbonized, leaving them scorched black and frozen in place. Clocks and watches near the center of the blast were often destroyed by the explosion, their hands forever indicating 8:15 AM: the precise time of the blast.[7]