Soviet Union effect on the Pacific 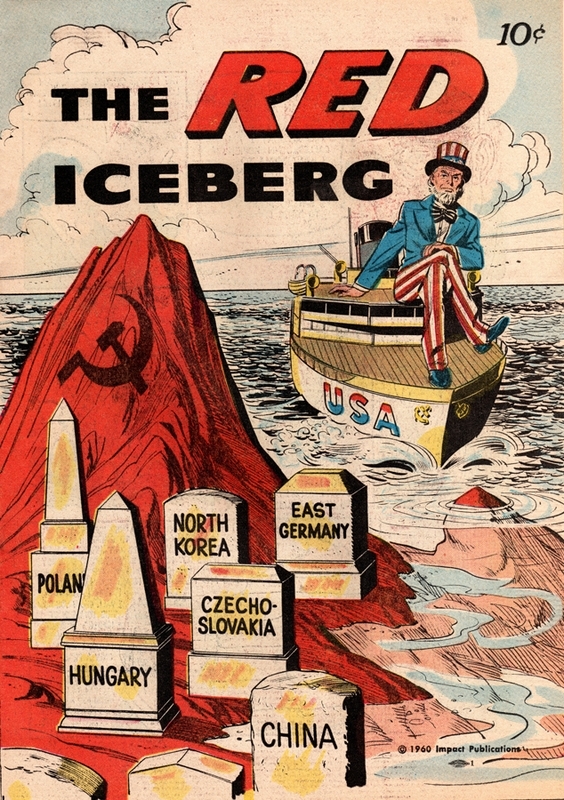 1960 comic book warns young readers of the dangers ahead should Uncle Sam fail to steer clear of the "Red Iceberg."

Soviet Union’s effect in the Pacific

The events in the European theatre of the war had shown the other Allied powers; Great Britain and the U.S how the Soviet Union intended to use the fallen axis powers. In an agreement at the Yalta conference, the Soviet Union would enter war with Japan three months after the war with Germany had concluded. At the Potsdam Conference, Stalin ordered his supreme commander of the Soviet troops in the Far East to move up the timetable for the invasion. The change from the 20-25 of August to early August many historians agree was a direct result of what Stalin called American maneuvering. What he perceived was the U.S’s attempt to make Japan surrender before the Soviet invasion could occur.[1] The neutrality pact made with the Japanese was signed in April of 1941 to ensure neutrality between the two nations. Prior to the surrender of Japan, the Japanese government made numerous attempts to resign the neutrality pact with the Soviet Union. The Soviet Union, attempting to keep the invasion of Manchuria a surprise made little attempt to finalize a pact with Japan.[2]

The United States Strategic Bombing Survey, published in 1946, concluded that Japan would have surrendered before Operation Olympic on November 1st.[3] the survey stated that even without the Soviet Invasion of Manchuria and the use of Atomic bombs Japan would have surrendered. Many revisionist historians have used this survey as an argument that the atomic bombs were not necessary to force Japan to surrender. The survey’s author Paul Nitze’s main objective of the study was to prove that conventional bombings, as well as a coordinated naval blockade would have caused Japan to surrender before Operation Olympic.

Soviet actions in Poland had already begun to sever the relations between the USSR and the US. After seeing these actions after the fall of Germany President Truman asked his military advisors whether it might not be better to force Japan to surrender without the help of Soviet intervention as was planned in the Potsdam Conference. Truman’s advisors even remarked ‘the entry of the Russians will have an enormous military effect, because it will bring the date of the war’s end closer, and thereby save American lives.’[4] The question that many historians ask given the documents from the Second World War is were the bombs needed to force Japan to surrender unconditionally?[5] If the answer to that question is no, then why would the United States use them anyways? Many revisionist historians would point to the picture of the American propaganda you see here on the screen. Truman was considerably more anti-Soviet than Roosevelt shared the same opinion that many Americans did in 1945. The Soviet Union and communism was the next greatest enemy to  American democracy. Under advisement from military personnel Truman sought involvement from Stalin until July 16th when the first bomb was tested successfully.[6] Many historians claim that the use of the atomic bombs on Japan was used in more ways than the simple narrative given by Truman to save lives. In the start of the cold war that was to come between the Americans and the Soviets, the US used the bombs as a message of power to Stalin that they were not to be trifled with. It is with the analysis and argument that the bombs were not necessary and yet still used, that historians still argue the reasoning for the dropping of the bombs till today.