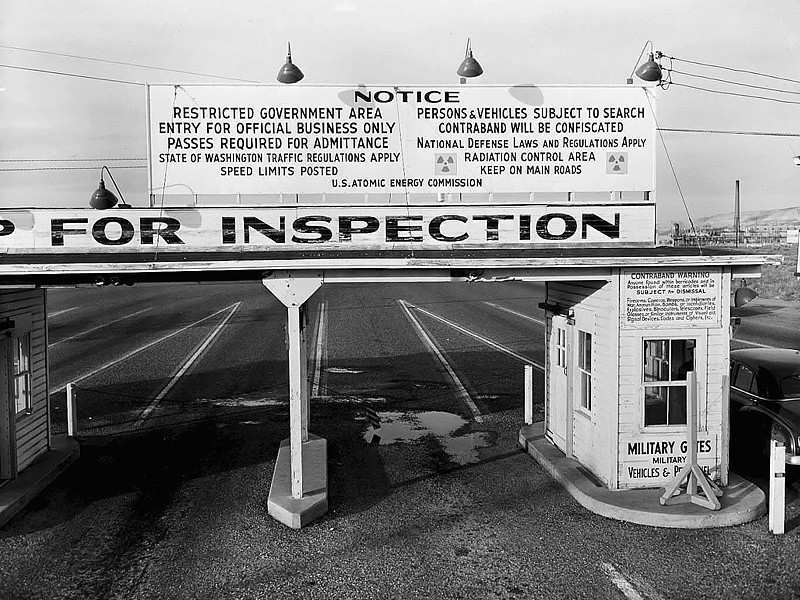 The secrecy and security measures implemented at Hanford rivaled those of the extensive safety procedures of other government projects not in terms of quantity but the severity of consequences if breached. The Hanford site was cordoned off with barbed wire fences and designated a restricted area shortly after the previous inhabitants were bought out of their land. Standard security checkpoints with security officers on 24-hour watch limited general public access to the site. These structures were built over the main access roads on the borders of the site by the U.S. Atomic Energy Commission.[1] Regarding employee security, each potential employee was subject to fingerprinting and extensive background checks to gain employment. Also required of the potential employees was the signing of a “Declaration of Secrecy”, enforceable under the National Espionage Act or the Federal Sabotage Act.[2] Only a handful of generals and government officials knew about the Manhattan Project and why it was created. In fact, less than one percent of the total workforce at Hanford understood what Hanford was producing and how it was going to be utilized.[3]

In addition, the examination of mail and eavesdropping on phone calls in the nearby town of Richland was regular practice by the FBI, Army and Hanford Site Patrol.[4] Vincent Whitehead, a counter intelligence agent at Hanford revealed the types of phone conversations that were checked were “Maybe some colonel’s wife talking to another wife.”[5] Yet the conversations held between those present at the site and others around the country were not limited to housewives of generals and other workers. Whitehead continued to say “...there was a code name given to each piece of apparatus and some of those professors for Christ’s sake would just clear say the description. And that fool used the name and mentioned delivery dates.”[6] Practices such as these were commonplace and workers were threatened with termination and relocation every day. Simply asking too many questions about the work being performed would be grounds for termination. The example of breaching the code of secrecy was further outlined by Whitehead,

“One story they (his informants) picked up on was that we were making rockets. They told me who had said it. I told my office this person was starting rumors and they took care of him. He got drafted real quick.”[7]

Print campaigns at Hanford further bolstered the effort of keeping the project secret from workers telling their wives and families of their work. These ranged from billboards built along main roads to flyers posted throughout the site and the surrounding areas.[8] The campaign created an atmosphere around Hanford where employees felt the sense of someone watching them all the time. This was the exact goal of the government officials and was reinforced daily.