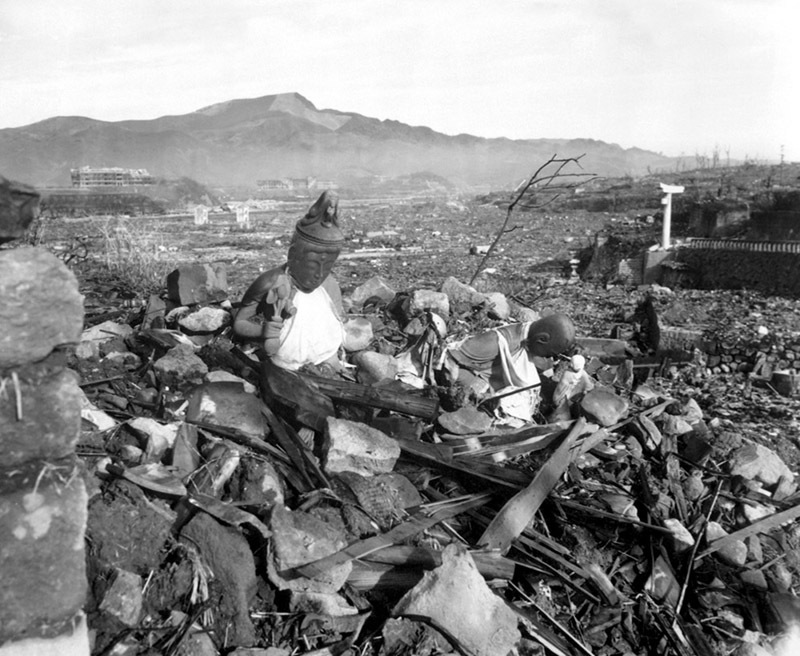 Aftermath of the nuclear devastation at Nagasaki. Photographer unknown.

On August 9th, 3 days after Hiroshima, another atomic bomb was dropped on Nagasaki. Nagasaki was not the inital target for the nuclear attack. The cities chosen by the Interim Committee for the atomic bombings were Hiroshima, Kokura, Nagasaki, Niigata, and Kokura.[1] Nagasaki was selected for bombing only due to the fact that the #1 target city of Kokura was covered with thick cloud cover. This meant the B-29 could not drop the precious payload accurately, resorting to the secondary target city of Nagasaki.

Similarly to Hiroshima, the citizens of Nagasaki were not prepared for the sudden attack. The only clue the citizens had to their potential fate was a newspaper article from August 8th vaguely describing the devastation at Hiroshima. Although air raid warnings were issued earlier in the morning, only approximately 400 citizens were in bomb shelters at the time of the attack. The nuclear explosion was to completely decimate the infrastructure of the city, rendering key services such as police stations, fire stations and hospitals inoperable. [2]

At 11:02 AM local time, the powerful Uranium bomb exploded 500 meters above the city, causing the same destruction and havoc it caused to Hiroshima. Many witnesses who saw the explosion from a distance described how they could physically feel the searing heat of the blast despite being miles away. The bomb had detonated in Urakami valley, where the majority of the city's medical facilities were located. Of the 70 practicing private doctors in the area, 40 or so were killed or seriously injured. This left only 30 doctors to tend to the masses of injured and dying victims. The absolute shortage of medical experts, equipment and medicine would further worsen the casualty rate. Key social systems completely collapsed; water and sewage systems, electricity and transporation services were destroyed. [3]

The death toll at Nagasaki was significantly lower than Hiroshima; 75,000 killed compared to 142,000. The estimated population present during the bombing is estimated at around 270,000. The minimum estimate was at least 70,000 dead. This was partially due to the fact that Nagasaki's local terrain consisted of multiple chains of steep hills and mountains, which contained the nuclear blast's shockwave. The city had developed in a ribbon-shape along the long course of a valley-river, making it impossible even for an atomic bomb to fully devastate the entire city.[4] The fact that the bomb was dropped three miles away from the main population center also played a factor.

Overall, the atomic bombing of Nagasaki did not result in more devastation than Hiroshima, despite the fact that Fat Man was more powerful than Little Boy. The area of near complete devastation was approximately 1.8 square miles. [1] Nagasaki is the second and last city in history to be bombed with a nuclear weapon.

← Hiroshima
Reasoning Behind the Bombs →
Effects on Cities
Nagasaki