America's decision to drop the bomb 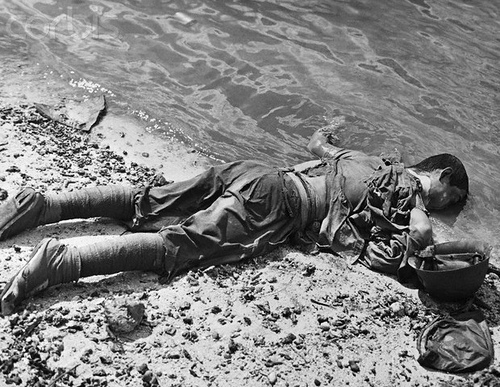 The United States of America was struggling to force the Empire of Japan to surrender by 1945. The island hopping campaign method in the Pacific was beginning to take extreme effect allowing the American navy to begin to hit islands close to the mainland Japanese islands. Thousands of U.S soldiers had died as the Americans pushed westward in the Pacific. Forcing the Japanese government to surrender became the upmost priority. Operation Olympic was planned as the invasion of the southernmost island of Kyushu in late 1945.[1] Operation Coronet was also planned as the attack against the capitol of Japan, Tokyo. Which was set for the next year in 1946. The planners of the invasion of Kyushu and Tokyo estimated that on the Home Islands of Japan the total military units available to defend were at 3,500,000 strong.[2] With incomplete numbers in the invasion of Saipan and its costs, the U.S government concluded that it cost roughly one American life with several wounded soldiers to kill seven Japanese military personnel.[3] On this basis and calculation the U.S assumed that an invasion of mainland Japan would cost half a million lives with many times that number in wounded soldiers.

The war in the Pacific was altogether a different war than the war in Europe. The warfare itself was amphibious in nature and the enemy all the more dedicated to killing American soldiers. Battles like the one on Iwo Jima where the Americans suffered more casualties than the Japanese were extremely hard on moral. Though the total death count was higher for the Japanese, the US lost 6,821 men with nearly 20,000 wounded. A comparison to Japanese loss and fighting strategy; 18,000 out of 21,000 soldiers stationed in Iwo Jima died. There were less than 200 soldiers who surrendered and the rest were unaccounted for. The fighting spirit of Japan was more evident the closer US troops got to Japan. The photo shown in this page illuminates the carnage seen by soldiers after each of the island campaigns were finished. One marines comment spoke loudly for the attitude of US soldiers in the Pacific.

“I hope to God that we don’t have to go on any more of those screwy islands.”[4]

On the basis of the pre-invasion casualty numbers estimated off of the losses had in Saipan. President Truman, who was newly inducted into the position following the death of Franklin D. Roosevelt. Taking the oath of office in January 1945, Truman would be tasked with one of the greatest decisions in American history. The high-end estimates suggested approximately two million US casualties in an invasion of Japan based on the Saipan ratio.[5] The Soviet Union (a growing threat to US democracy) was also expected to attack the Empire of Japan after August 8th, 1945. According to the Yalta Conference in February as agreed upon by Stalin and Roosevelt, the Soviet’s would enter the war in the Pacific three months after the fall of Germany.[6] Hoping to avoid the division of Japan such as that in Germany Truman was now more than ever pressured to get the Japanese to surrender unconditionally. On August 3rd, 1945 President Truman authorized the use of an Atomic bomb on Japan due any day that the weapon was available. Upon the detonation of “Little Boy” on the city of Hiroshima on August 6th, 1945 Truman gave a white house press release.

“We are now prepared to obliterate more rapidly and completely every productive enterprise the Japanese have above ground in any city. We shall destroy their docks, their factories, and their communications. Let there be no mistake; we shall completely destroy Japan’s power to make war.”[7]

The need for an American invasion on the home islands of Japan was unnecessary. Eleven days later on the 15th of August the announcement was made of Japan’s surrender. The half a million to two million lives estimated to successfully invade Japan would be spared. The Second World War had come to an end with the only two instances in history of atomic weapons being used on a country during war. The U.S had not only stopped the carnage of a land and sea invasion of Japan but also spared Japan from the further incursion of the Soviet Union. Eighteen years later Truman would correspond with a writer from the Chicago Sun-Times named Irv Kupcinet reflecting on his choice to drop the atomic bombs on Hiroshima and Nagasaki.

“I knew what I was doing when I stopped the war that would have killed a half million youngsters on both sides if those bombs had not been dropped. I have no regrets and, under the same circumstances, I would do it again.”[8]

[1] D. M. Giangreco, “ “A Score of Bloody Okinawas and Iwo Jimas”: President Truman and Casualty Estimates for the Invasion of Japan” in Pacific Historical Review 2003, (University of California Press), 99.

[4] J. Samuel Walker, Prompt and Utter Destruction: Truman and the Use of Atomic Bombs against Japan (Chapel Hill: The University of North Carolina Press, 2016), 23.

[7]  The White House, Washington D.C,. Statement By The President Of The United States. 1945. Print.