Beyond the Confines of Camp

Although incarceration was largely defined within the barbed wire perimeters surrounding each camp, many internees served on seasonal work crews. In addition, internees were also allowed to attend colleges outside designated military areas and permits were also granted to internees who wanted to shop in nearby towns. Work leave provided a chance to temporarily escape the confines of camp and provided farmers much needed labor in a time when many able-bodied Americans were overseas. Although leave provided benefits for internees and the communities surrounding the camps, the topic was at times contentious. For example, in Utah and Arkansas, internees on leave were fired upon by locals. The cities of Cody and Powell, Wyoming formed a more organized protest by banning unescorted internees from Park County. While leave presented opportunities, it also tested the tolerance of nearby communities forced to adapt to the detention camps springing up seemingly overnight.

For more information see the added resources section on life outside of camp. 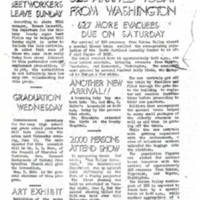 One of the front page articles announces a need for workers to pick sugar beets. From initial phases of their exile, Japanese American internees were furloughed to provide critical labor at nearby farms. 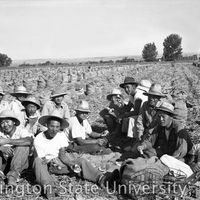 A group on work leave from Heart Mountain rests amongst a field of bagged onions in eastern Oregon. 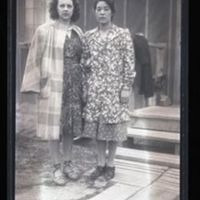 The Hide family lived with the Bresslers in Lyman, Nebraska when they were on work leave in the winter of 1943.  This photo is of Marie Bressler and Kiyo Hide at Heart Mountain. 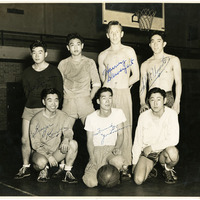 By 1944, Japanese Americans recently graduated from high school began attending colleges and universities outside the West Coast. This photo is of an intramural basketball team at Washington State College comprised mainly of Japanese Americans. 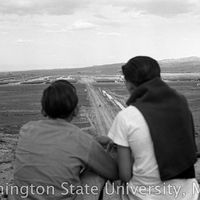 This photograph taken in the spring of 1944 shows two young internees looking at Heart Mountain during an escorted trip into the hills near the detention camp.