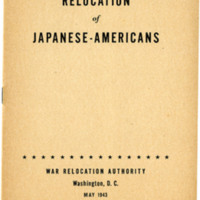 This pamphlet emphasizes the WRA's belief that the detention camps promoted democracy. This perspective conflicted with many facts about incarceration, not the least of which was the imprisonment of American citizens without due process. 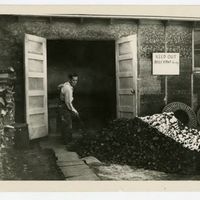 A number of work stoppages occurred in the camps. In 1944, the boiler room staff at Minidoka Relocation Center went on strike for 6 days in December over staff reduction. This photograph shows a man shoveling coal near a boiler room at Minidoka. 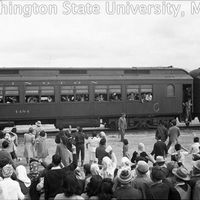 In order to quell dissent in the camps, the WRA initiated a policy called "segregation" where those answering no to questions 27 and 28 on the loyalty questionnaire were sent to Tule Lake in 1943. These individuals were known as "no-no boys." This photograph shows a transfer of internees between Heart Mountain and Tule Lake. 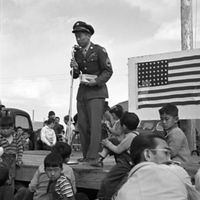 In response to draft resistance and the inability to muster volunteers, the WRA sponsored a tour by a Japanese American tail gunner named Sergeant Ben Kuroki to improve recruitment in the camps.  Unlike Sergeant Kuroki, most of the Nisei recruited from the camps served in a segregated infrantry unit that while highly decorated, experienced a high casualty rate.

Question 27:  Are you willing to serve in the armed forces of the United States on combat duty, wherever ordered?

Question 28:  Will you swear unqualified allegiance to the United States of America and faithfully defend the United States from any or all attack by foreign or domestic forces, and forswear any form of allegiance or obedience to the Japanese emperor, or any other foreign government, power or organizations?
--Questions 27 and 28 from “the loyalty questionnaire”

While the initial removal of Japanese Americans met little in the way of physical resistance, a number of issues inside the camps inspired protests. Two particularly divisive issues were the distribution of the loyalty questionnaire and the expansion of the draft to the camps.

The loyalty questionnaire, first distributed in February 1943, served two purposes. It determined eligibility for release from the camps through either military service or indefinite leave clearance. Questions 27 and 28 drew particular anger from many internees.  Question 28, for example, presented a paradoxical trap to many Issei and Nisei internees.  For Issei, who could not obtain U.S. citizenship, renouncing allegiance to Japan meant renouncing the only citizenship they had.  For Nisei, answering yes to the question implied a previous allegiance to Japan, thus placing their American citizenship in potential peril.

In January 1944, the draft was expanded to all Nisei. The primary argument against the draft was that it was unethical to ask citizens to fight for their country while at the same time denying them due process.  The most organized protest to the draft occurred at Heart Mountain, where the Fair Play Committee advised civil disobedience by refusing orders to report before the draft board.

For more information see the added resources section on dissent.

← Life on the Inside: Creating a Sense of Place
Beyond the Confines of Camp →
Life in Exile
Dissent and Resistance