“That these areas were still vacant land in 1942…speaks volumes about their attractiveness.”
Roger Daniels (Concentration Camps: North America, page 96)

The initial removal of Japanese Americans involved a stay at a temporary "Assembly Center." Most of these facilities were converted fairgrounds or racetracks unsuitable for human habitation. Upon completion of the ten Relocation Centers, internees were transported by train to these larger facilities located in the remote interior of the United States. Many internees later recalled hardships imposed by adverse environmental conditions, such as wind, dust, mud, extreme heat or cold. Within these bleak landscapes, the War Relocation Authority constructed hundreds of barracks comprising uniform blocks with shared latrines and eating areas. Each family was allotted at most an apartment measuring 24x20 feet.

In addition to physical hardships, the new internees faced the task of constructing a new community that included strangers from diverse regions of the West.  The disruption experienced by the internees came in a variety of forms.  The leadership of the community shifted from the older Issei generation to their American-born children, the Nisei.  This abrupt transition occurred due to the WRA’s decision to only allow citizens to become block leaders.  Internees also needed to negotiate their new surroundings where privacy was scarce and activities typically conducted in the home, like eating and bathing, were performed in shared facilities.

For more information see the added resources section on arriving to camp. 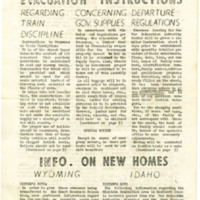 This issue of the Portland Assembly Center's newsletter provides instructions for transport to  Relocation Centers located in Idaho and Wyoming. 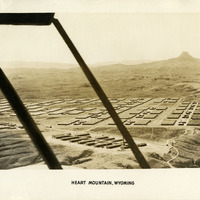 From this aerial photograph of Heart Mountain Relocation Center, one can get a sense of the geographic isolation of the detention camp and the cookie cutter arrangement of the blocks and barracks. 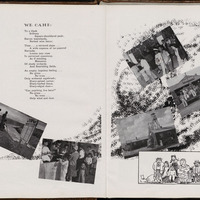 This poem parallels the despair of arriving to Heart Mountain with the bleak landscape and accomodations. 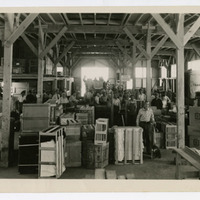 This photograph from Minidoka Relocation Center in Idaho shows several internees amongst crates, boxes, and luggage. 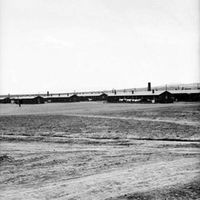 Many of the facilities were incomplete upon arrival. At Heart Mountain, this lot remained empty until a high school was built in time for the 1943-1944 school year. 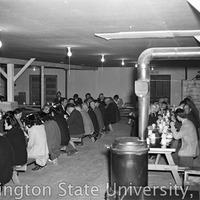 The camps adversely affected family routines.  Meals at mess halls changed dining from an intimate family-centered experience to a public activity where one could choose whether or not to eat with family.