This edition of Zetetic Astronomy: Earth Not a Globe! was published in 1881 by Samuel Rowbotham (a.k.a. Parallax), an English writer/inventor and the father of the modern flat earth movement.  Rowbotham’s observations on a six-mile straight-line stretch of the Bedford River led him to believe the Earth was actually flat, and he spent the rest of his life investigating and arguing that case. A quick wit and a consummate debater, Rowbotham’s debating skills won many converts to his theories. His first edition of this work was published in 1849 and was only 16 pages; this third and final edition clocks in at 430 pages 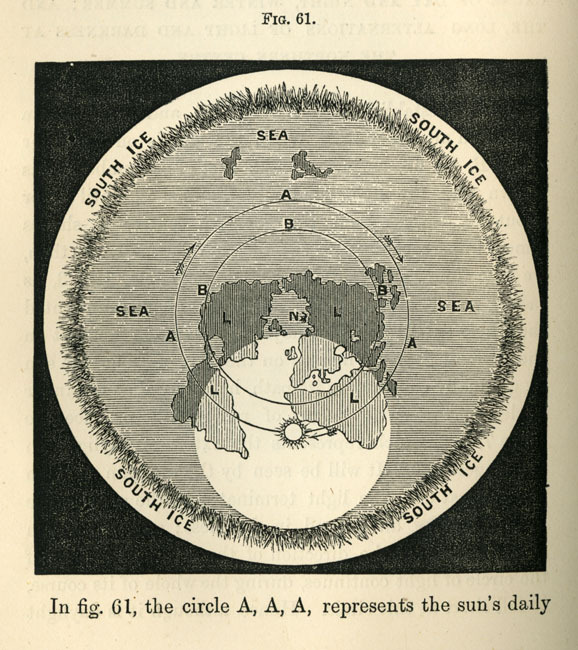 In this diagram, Rowbotham attempts to describe the movement of the sun in terms of his flat earth theory.

Following his 1884 death, the Universal Zetetic Society and the Christian Catholic Apostolic Church kept up his cause before slowly fading, though in 1956 the basic ideas saw a rebirth in the form of the Flat Earth Society.

The term zetetic is Greek, meaning to proceed by inquiry, and Rowbotham spent his life in that inquiry.  His initial failure to detect that Bedford River curvature has been attributed to the superior mirage, a phenomena wherein light passing through different temperature air can refract, allowing people to view things which are actually below the horizon.  This phenomenon is also held as partially responsible for a belief that the Northwest Passage existed, when these mirages caused mountain ranges and coasts to appear hundreds of miles from their true locations.