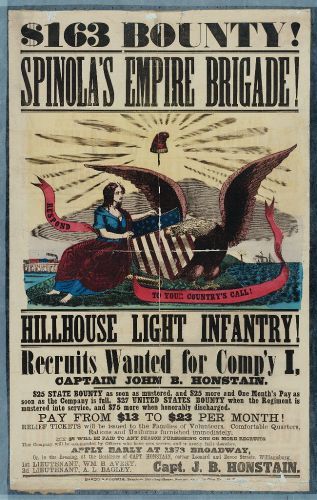 Wartime progaganda poster encouraging men to volunteer for the army

The men of the Union forces experienced immense pressure to join the war effort. Lying about their age, boys joined the war effort to bring honor to their family. A soldier of New York’s 7th Heavy Artillery said “It would be a disgrace never to have been in an engagement.”[1] At the same time, if men did not uphold to the standards of what was considered honorable at the time, it would have the reverse effect. One union soldier said “I hope some friend will immediately shoot me as that the disgrace shall not attach either to my wife or children.”[2] Often time’s men within regimens would talk about their fellow commands via letters to home. It wasn’t uncommon for men to write home that they would prefer “death before dishonor.”[3]