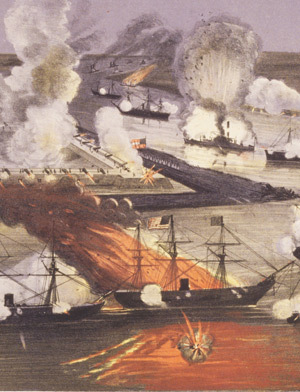 Depiction of Navy vessels in combat

Although historically underplayed in comparison to the major battles and high fatalities of the land campaigns, the naval theatre of the United States Civil War was instrumental for both the Union and the Confederate war effort. In fact, it can be argued that it was a naval action, the resupply of Fort Sumter by a United States support vessel, which initiated the Civil War.

As the war began, Union strategists such as Winfield Scott recognized that one of the North’s most prominent advantages over the South was its plethora of experienced naval officers and comparatively larger fleet. With this in mind, the union command adopted the Anaconda Plan, a strategy to simultaneously blockade the coastal South to prevent Confederates from importing much needed supplies, while also driving down the Mississippi and Ohio Rivers with gunboats in order to divide the Confederate States in half and capture strategic fortifications and towns. Recognizing their naval disadvantage early on, the Confederates set about on a dual program to develop new techniques in naval warfare in order to gain a technological upper hand in the war at sea, while also enlisting civilian blockade runners to smuggle goods past the Union flotilla.