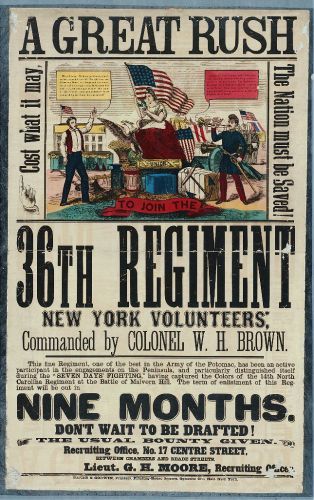 “Cost what it may, the nation must be saved!” The poster was  recruiting young men volunteer for the 36th regiment of the Union. The poster contains information such as the name of commander, the term, the bounty and the contact, calling young men to join the army before the draft.

Posters were commonly used as recruitment tools for soldiers on both sides. Posters were easy to create, circulate, and could share a targeted message. Military recruitment posters call on a soldier’s sense of nationalism and patriotism, emphasizing the need for masculinity, and offer men a chance to prove themselves (Brown, 2007, 69). Included in this section are two examples of Civil War era recruitment posters.