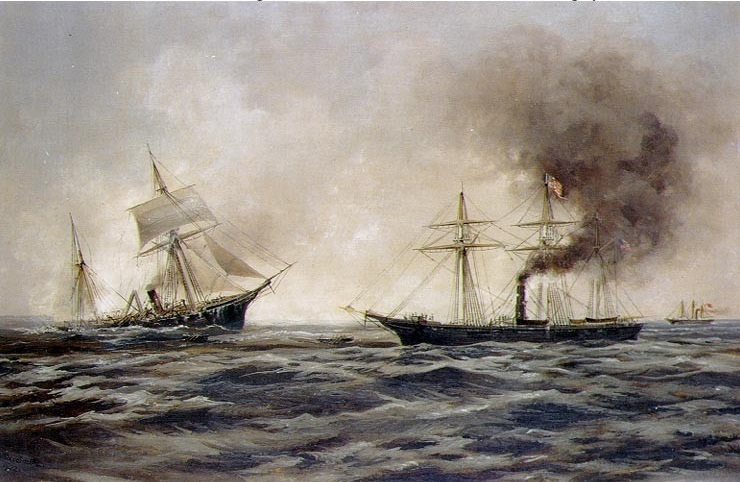 An artists rendition of the vessels Kearsarge and Alabama doing battle

The blockade of the South instituted by the Union over the course of the war would become a massive undertaking, utilizing over 500 ships and 100,000 sailors.[1] Although boring and tedious in nature for those participating, this undertaking was a welcome endeavor to Union men, because the casualty rate of participating sailors was nearly identical with that of the civilian population of the North, meaning that very few died of combat or disease, in stark contrast to the casualty rate of soldiers participating in the land campaigns. Likewise, the men were paid well, and had the opportunity to split the profits of captured Confederate shipping.

With each passing week, as the Union army advanced along the Southern coast and Confederate ports came within reach of Union vessels, the blockade tightened its grasp on Southern commerce by capturing blockade runners attempting to smuggle war supplies into the coastal South. By 1865, the Union navy had captured roughly 1,150 ships, costing the Confederate States up to $30,000,000 in damages.[2] Despite these odds, Confederate and European citizens continued to attempt to run the blockade, due to the high price for imported goods in the Confederacy, and high demand for cotton among European textile manufacturers.

In order to circumvent the Union Navy, blockade runners generally sailed over 500 miles from a major Confederate port under cover of darkness to Bermuda or the Bahamas, where European merchants awaited them. The initial run from the coastal South was incredibly dangerous, as blockade runners often sailed without any light aboard to lessen their chances of detection by Union watchmen. This made navigation difficult, resulting in countless ships running aground as they attempted to pilot the coastal reefs and islands. Once the blockade runners reached their intermediary location, such as the Bahamas, they met with European merchants and exchanged goods offshore, away from British authorities (who were more than willing to turn a blind eye to the trade). The American consulates in these islands were fully aware of this activity, but were unable to take action against the smugglers without risking the ire of the British government.[3] Mr. Charles Maxwell Allen, the U.S. Consul to Bermuda, described the situation and his frustration with the British authorities as such:

A great many blockade-runners are in the harbor now, more than ever before- 3 or 4 a day sometimes but few get caught. They are making a great deal of money. The rebel steamer Florida came in yesterday and left at night; she has burned one or two vessels near land and has blockaded the port for nearly two weeks; neither the Authorities nor the papers do not find one word of fault; it is all right when it is on that side; if one of our vessels should do so there would be a “howling”.[4]

For all their effort, the average blockade runner was only able to make four successful runs before being captured by the Union Navy.[5] However, the profits gained from these few trips proved to be more than enough to sustain the traders, while the supplies which the Confederates attained served to be just enough to keep the government and war effort afloat.