Women in the North 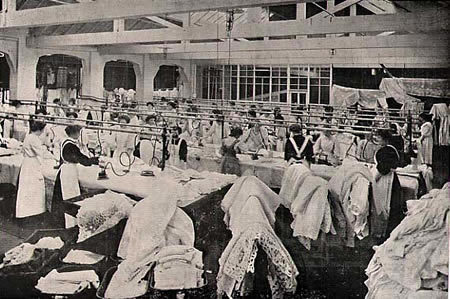 Northern women during the Civil War served many roles including soldiers, nurses, civil rights activists, and abolitionists. With that being said, many women rallied together to help supply troops with food, clothing, money, and medical supplies. However as the course of the war progressed women’s roles changed significantly. Before the war started, women in the North had been exposed to work in a variety of industries such as clothing and textiles. However, as the war progressed, women began to take on employment in different fields, as men were constantly filtering out for war. Women began to take on jobs in the fields and in civil service. Therefore, “as men entered the Union army, women's proportion of the manufacturing work force went from one-fourth to one-third.”[1] Women began to take on more responsibilities and became comfortable with their independence. As the war shifted so did women’s roles.

Women on the Northern front did not directly experience violence like their counterparts did in the South. However, women in the North did struggle to make wages while their male relatives went off to war. That being said, many women began to take on jobs in urban communities. For example, “in Washington, D.C., many women took desk jobs, once held by men, in departments of the federal government. Like women in the South, Northern women assisted the war effort from the home front by making and gathering supplies for the troops, and they had considerably more resources to draw upon than did Southern women.”[2] With that being said, the federal government became the largest employer of women during the Civil War. Yet, as the war continued families of the North began to loose patience in the toll the war took on them. Working class women began to join in on riots against the draft in Northern cities such as Boston and New York in 1863.[3] Many women took it upon themselves to get directly involved in the Civil War as help was needed and appreciated.

[3] Library of Congress, "Women and the Civil War," Teaching with Primary Sources, 2.