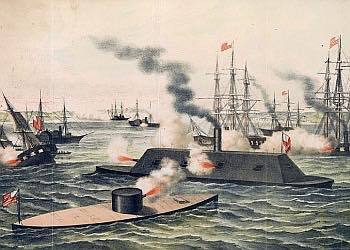 The significance of the Monitor in American naval military and technological history cannot be overstated. In stopping the Virginia’s rampage, the Monitor, prevented a Confederate naval attack on the national capital, protected the Atlantic blockading squadron and offered a workable model for other ironclad vessels to be used by the Union Navy.[1]

By the middle years of the war, the Confederacy and Union both had introduced ironclads in order to overcome the wooden fleets that each country maintained. It was these ships, more so than any other wartime naval innovation, which would revolutionize naval warfare and have long standing effects after the surrender of the Confederacy in 1865.

With the invention of steel plate technology, both Union and Confederate warships would make the wooden seafaring vessels of the world obsolete. This technology served the navy first in 1862 at the Battle of Hampton Roads. The first of these vessels was made by the Confederacy and was named the CSS Virginia. The Union’s version of the ship would be called the USS Monitor.

Each side raced to complete their design before the other. The Confederates wanted to nullify the Union’s advantage of naval power, while the Union wanted to take away any strategic economic support the Confederacy might obtain from its remaining ports.

On March 8, 1862 the Virginia drew first blood. It sailed out of Norfolk, Virginia late in the evening and sank two Union vessels: the USS Cumberland and the USS Congress. It retired back to Norfolk as the sun went down seeing that the other major Union vessel in the area the USS Massachusetts, had been disabled. Early the next morning the Virginia set out to finish its work from the previous evening. As it was coming within range to fire upon the disabled Union ship, the Confederate crew found that a new vessel had slipped into the area under cover of darkness and had stationed itself between them and the Massachusetts. The new vessel opened fire. At this point the crew of the Virginia realized that it was another ironclad ship. The Monitor had arrived and the first Battle of the Ironclads commenced. After shelling one another for four hours and unable to sink the other, they retired, each thinking they had won the battle. In reality, it ended in a draw.