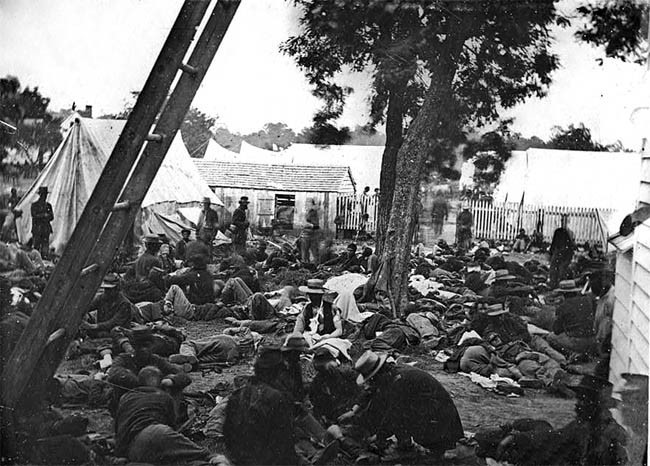 Savage Station Field Hospital Va., after the Battle of June 27

Life of a union soldier was not consumed with fighting. In fact, it was only a small proportion of the time they spent. Often, they spent their time in the monotonous routines of camp life. During fair weather seasons, soldiers could expect to be in engaged battle one day a month. [1] Living in camp life was not always that pleasant. Especially living in a tent. Austin C. Stearns of the 13th Massachusetts said “simply a piece of cloth about six feet square with a row of buttons and button holes on three sides; two men pitched together by buttoning their pieces together and getting two sticks with a crotch at one end and one to go across at the top and then placing their cloth over it and pinning it down tight.”[2] Within these camps, they often acted like mini cities. These camps would be temporary until winter would set in. At that time, they would construct mini-log cabins that could hold several men. It was not uncommon for men to name their little ‘mug-cabins’ after the elegant hotels back home.

← Alcohol Use
Food →
Life of a Union Soldier
Fighting