War in the West

Many believe that the Civil War was geographically removed from the western territories in the United States, but that did not mean that they were not involved. The West is often a forgotten part of the Civil War. In the Western United States there were two theaters in the war; the Tran-Mississippi Theater which extended from the Mississippi River to the states and territories on the Pacific Ocean and the Pacific Coast Theatre which included the states and territories on the Pacific Ocean.  Troops stationed in these regions were mobilized and battles were fought to decide the future of the nation.  The territory of Oregon also played an interesting role in the conflict of the Civil War.

When it became apparent that the war between the Union and the Confederacy was not going to be a short conflict, Oregon organized two Union regiments and more than 10,000 Union and Confederate veterans made their way into the Civil War from that state.  Today, there are monuments and graves throughout the state—Oregon had ties with the Civil War that often go unnoticed.

Federal and state officials scrambled to find replacement troops to maintain a military presence and keep the peace in Oregon.  Volunteer cavalry and infantry were recruited from Oregon and California to join the 1st Oregon Volunteer Infantry Regiment and the 1st Oregon Cavalry.  Although many believe that the main duty of these forces was to deal with the “hostile Indian bands,” the main duties were much more mundane.  These included spending time in garrison duty at small posts in Eastern Oregon.  This meant protecting immigrant trails and escorting wagons trains of people to the area due to the flow of people into the region.

During the Civil War, there was still a huge influx of miners and settlers to the region, hoping to get lucky in the new found gold fields of Oregon.  These gold seekers often had issues with Native peoples, including the Paiute, Shoshone and Bannock tribes, who were tempted by taking settlers' clothing, food and horses. Military intervention was necessary for these conflicts, as they quickly created tensions.  So after establishing Camp Watson in 1864, the volunteer units in Oregon were used to guard travel routes and Native American reservations, escort immigrant wagon trains, and protect settlers from Native American raiders. Units also built roads throughout Oregon and engaged in lengthy and often fruitless explorations searching for elusive Native Americans. 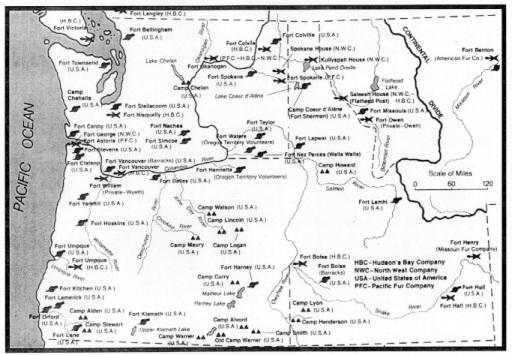 Map of Oregon Military Outposts During the Civil War

Even though California was part of the Union, many in the south of the state had southern sympathies because many had migrated to the region from the South. For example in the 1860 presidential election, Abraham Lincoln only received 25 percent of the vote in the city of Los Angeles. After the war began, some Confederate eyes turned to Southern California in hopes of creating a confederate state because of these sympathies, as well as the gold in California and the harbors that products for the war effort could be shipped to since they were blockaded from Europe by the Union. The rising confederate interest in Southern California prompted the Union to station as many as eight thousand troops at Camp Drum Barracks in the Los Angeles area to protect the Southwest from Confederate Invasion. Today, the Drum Barracks Military base serves as a museum that preserves the artifacts and tells the history of California in the Civil War. 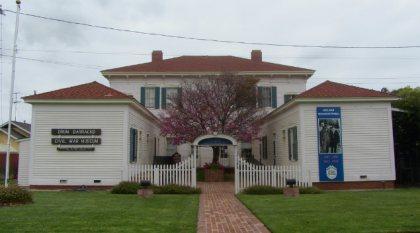 Notable military campaigns took place in these far flung territories of the United States. The Union led the Red River Campaign in order to capture the Trans-Mississippian regions of Louisiana and Texas. With the blockades of Confederate ports on the Atlantic Coast, the ports of Louisiana and Texas became known as the “backdoor of the Confederacy” since they continued to ship southern goods such as cotton to Mexico, and then to Europe in exchange for supplies. The Red River Campaign was largely a disaster for the Union as attempts to invade the region were continually deflected.

The Confederacy’s major campaign in the western states and territories was titled as the Southwestern Campaign. With strong secessionist sentiment in Southern Arizona and other portions of the West, the Southwestern Campaigns goal was to take Utah, Colorado, Arizona, and California from the Union. Initially the campaign was very successful as Confederate armies marched into New Mexico and Arizona, going as far to declare Arizona a full confederate territory in 1861. Following this, the two most important battles of the West occurred. The Battle of Glorieta Pass was fought on March 26-28, 1862 as reinforcements from California arrived. The battle resulted in a Union victory and while there were not high amounts of casualties, it did effectively end Confederate expansion into the rest of the Southwest. The Battle of Glorieta Pass was followed by the Battle of Picacho Pass, which was also a Union victory and drove Confederate forces from Tuscon, Arizona and out of the Southwest shortly after.

Both the Union and the Confederacy fought campaigns in the Indian Territory (present day Oklahoma) and other parts of the west. Native Americans would align themselves with the Union and Confederacy alike in battles that were scattered across the west. In the Indian Territory alone, there were seven recognized battles and several other skirmishes, while other conflicts occurred in the Sioux Wars in Minnesota in 1862 and the Navajo Campaigns in 1864.