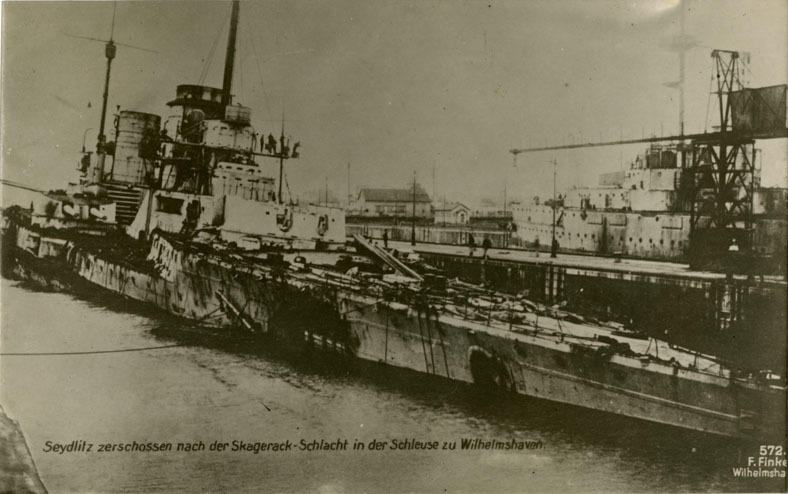 German battlecruiser Seydlitz following the Battle of Jutland. It suffered extensive damage and was only saved by quick damage control by the crew. The gun barrels from the forward turret have been removed to lighten the weight at the bow and make it possible to tow the ship 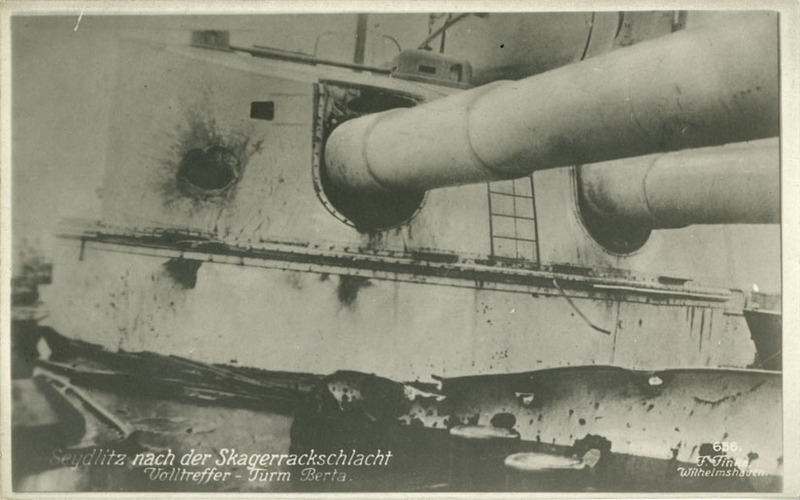 George Frederick Jewett amassed a large collection of ship photography that spans from the late 1860’s through to the 1940’s. Present in the collection are photographs, postcards, a scrapbook, and older cyanotype prints. Cyanotype is a photographic printing process that was a low-cost way to produce copies of photographs and drawings- this is interesting as this showcases the inexpensive photographic alternatives of the day. The scrapbook concentrates on the German High Seas Fleet during World War I- it provides photographs of many of the German capital ships that were eventually scuttled at Scapa Flow at the conclusion of the war. Photographs of some of the major ships sinking are present. This section of the collection contains material on a variety of ships from all of the major powers of the day as well as many of the lesser navies. Additionally, many types of vessels and the rapidly changing naval technologies that forced countries to build ever more expensive ships is showcased. From the ironclads of the United States Civil War through to the 1920’s, Jewett amassed a collection that encompasses the battleship period before the introduction of naval treaties designed to limit naval growth. Mr. Jewett maintained relationships with friends in Japan and Germany and thus was able to obtain a large amount of material on these respective navies- allowing for a diverse collection containing unique primary material. However the collection is not limited to these two nations, and is broken up into country and era, and includes examples of many famous ships.