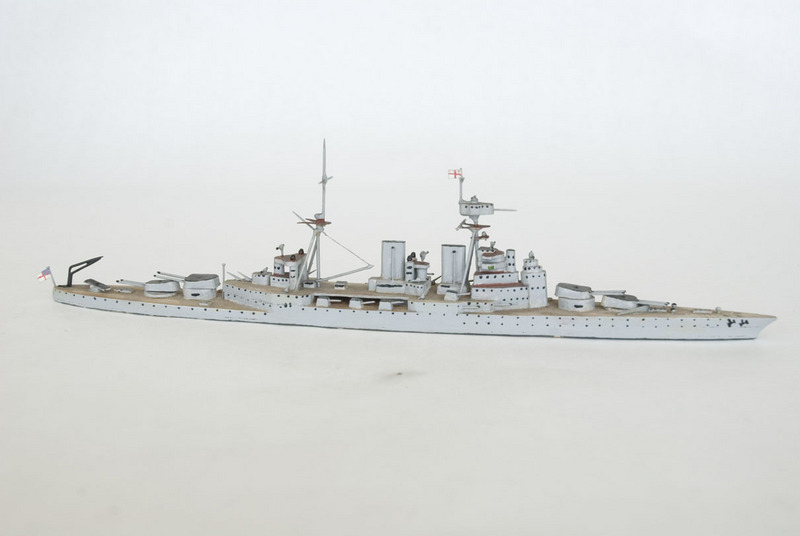 Another vessel with a famous but somewhat short career in World War II was the HMS Hood, the last battlecruiser built by the Royal Navy. Commissioned in May of 1920, the Hood was intended to be the lead ship of the Admiral Class of battlecruisers. Due to design flaws revealed at the Battle of Jutland, where several British battlecruisers were quickly sunk, and the financial struggles of Great Britain after the war, the Hood was the only Admiral Class ship to be completed. Over 860 feet long with a speed of 32 knots and carrying eight 15-inch guns, the Hood was the largest warship afloat upon completion. Serving as flagship of the British Fleet, it spent the early part of World War II hunting German commerce raiders. In July of 1940, it participated in the British attack on the French Fleet at Mers-el-Kebir, an attack intended to keep the French Fleet from falling into German hands after the French surrender in June 1940. Hood then underwent a refit before it was called to pursue the German battleship Bismarck. On May 24, 1941 Hood and the accompanying battleship HMS Prince of Wales engaged Bismarck. Hood was soon struck by several German shells and its magazines exploded, which caused the ship to break into two. Out of the 1418 men on board, only three survived. The loss of the ship and its crew made the sinking of the Bismarck a primary goal of the British navy. The wreck of the HMS Hood was discovered in 2001 and lies at a depth of 9,200 feet in two fields due to the explosion that sunk it.