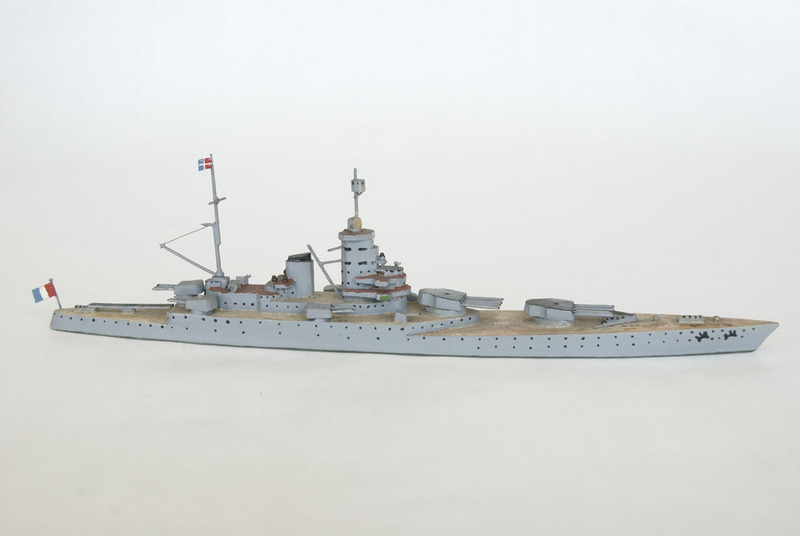 The French battleship Dunkerque was the lead ship of her class of fast-battleships. Due to the France’s suffering economy following World War I, these were the first capital ships (i.e., large warships) to be built by France after the war. Dunkerque was launched in October of 1935 in response to German pocket-battleships, which were fast and heavily armed ships that could wreak havoc on shipping. In order to match the speed and power of its German counterpart, Dunkerque was armed with quadruple gun turrets and capable of travelling at 31 knots. With the outbreak of World War II in September of 1939, France used Dunkerque to search for German commerce raiders. After France’s surrender in June of 1940, Dunkerque found itself in port at Mers-el-Kebir when the British attacked the French fleet. Although heavily damaged by HMS Hood during the attack it was beached to save itself from sinking. After temporary repairs, it made its way to the French port-city of Toulon for more extensive repairs. The Germans attempted to capture the remaining French Fleet under Vichy control in November of 1942, however, the French crews scuttled their ships to prevent this. Following this, the Italians attempted to salvage the Dunkerque but found the ship a total loss. The partially scrapped hull was then seized by the Germans. While under German control, the wreck was bombed several times by allied planes, but remained intact. In 1955, the Dunkerque was 1955 and its wreck sold for demolition in 1958.