Before the advent of electronic war-gaming and simulations, navies used models made of wood or metal to conduct training, assist with ship identification, and plan strategy. The Jewett Collection contains dozens of such “waterline models” so called because they represent the portion of the ship visible above the waterline. The majority of the collection consists of German naval ships. In addition, the collection includes British, French and American ships, as well as passenger ships, and buoys.  Popular manufacturers include Bassett-Lowke out of Northampton, England, Wiking and Pilot out of Germany, and the H E Boucher Company out of the United States, who produced many of the models in the Jewett Collection.

As models used in naval simulations, the boats were built according to standard specifications and included moving parts, such as rotating turrets. Models built to a 1:1200 scale (1 inch = 1000 feet) were particularly popular as the space used to run simulations often took up an entire room. In 1898, Frederick T. Jane created a set of rules published as the Fred Jane’s Naval War Game. Rules, such as Jane's, often took myriad factors into account, such as the ship speed, the thickness of a ship's walls, and firepower. The rules were so detailed, naval colleges and training programs used simulations to train officers.

The rules shown to the right are from the 1905/06 issue of the Jane's Naval Warship annual publication and reflect the need to continually revise the rules as naval technology evolved. 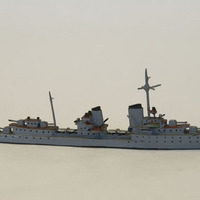 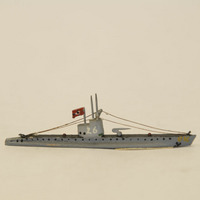 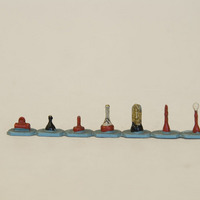