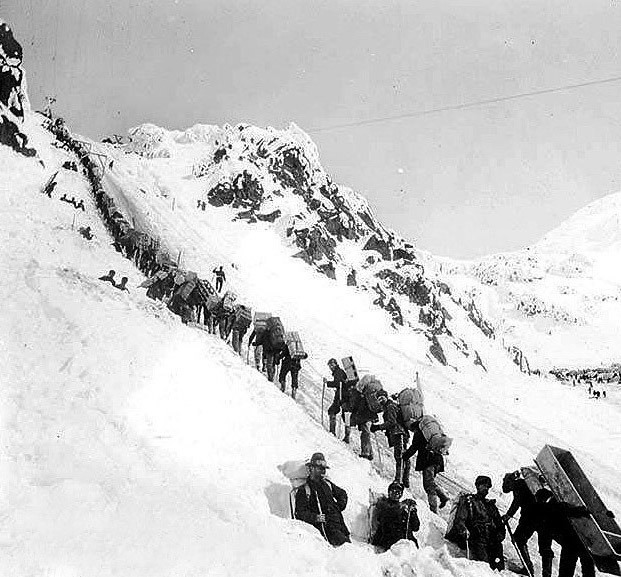 The travel to the Yukon was not like any other hike in the woods. Prospectors ascending the Chilkoot Pass, 1898.

In today’s world, gold is viewed as something that a person would put on their fingers, in their ears, or around their necks to solidify to the world their wealth. In the late 1800s it was looked at in a different type of eye because gold was used a lot differently than how it is today. This need for gold could be known as gold fever and not surprisingly it was making their way around the United States at an extremely rapid pace. Everyone wanted to jump on this train in order for the chance at possibly making more money than they would ever need on finding gold. These men and women would literally go to the extremes just to sink their picks and shovels into a ground so rich with gold that once they were done, they would never have to work another day in their life. Everyone who wanted to jump on the chance at becoming rich had to battle through treacherous trails to arrive at Dawson, a city in the Klondike where miners thought they could finally pull some gold from the ground. Still a lot of historians would say the gold rush era in the United States began in California in 1848 and came to an end near the 1900. Although there were miners who continued to search for the valuable metal into the twentieth century, another huge gold rush also known as the Klondike gold rush was around 1897 till 1900, which was the last of some of the major rushes that had occurred. People from far and wide had trekked to the upper part of the Yukon River in hopes of striking it rich. A lot of those who had made this trek to the Klondike because they figured this were the best alternative to better not only their life but their families as well. 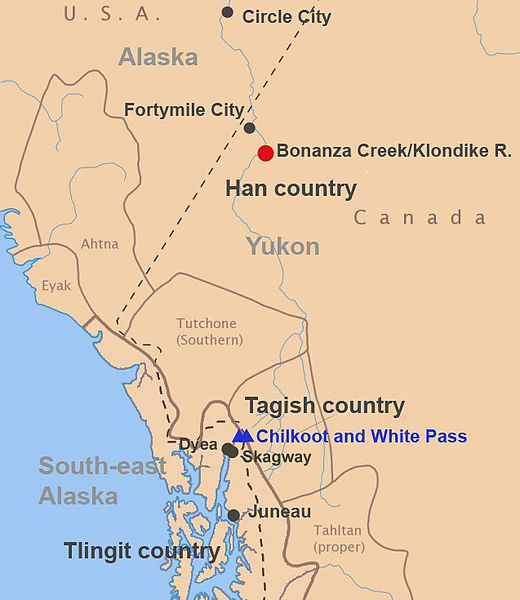 The general location of where people traveled to mined. The red dot is the holy grailed spot also known as the Klondike River.

The indigenous peoples in north-west America had traded in copper nuggets prior to European expansion Most of the tribes were aware that gold existed in region but the metal was not valued by them. The Russians and the Hudson Bay’s Company had both explored the Yukon in the first half of the 19th century, but ignored the rumours of gold in favour of fur trading, which offered more immediate profits.

In the second half of the 19th century, American prospectors began to spread into the peninsula. Making deals with the Native Tlingit and Tagish tribes, the early prospectors succeeded in opening up the important routes of Chilkoot and White Pass to reach the Yukon valley between 1870 and 1890. Here, they encountered the Hän people, semi-nomadic hunters and fishermen who lived along the Yukon and Klondike Rivers. The Hän did not appear to know about the extent of the gold deposits in the region 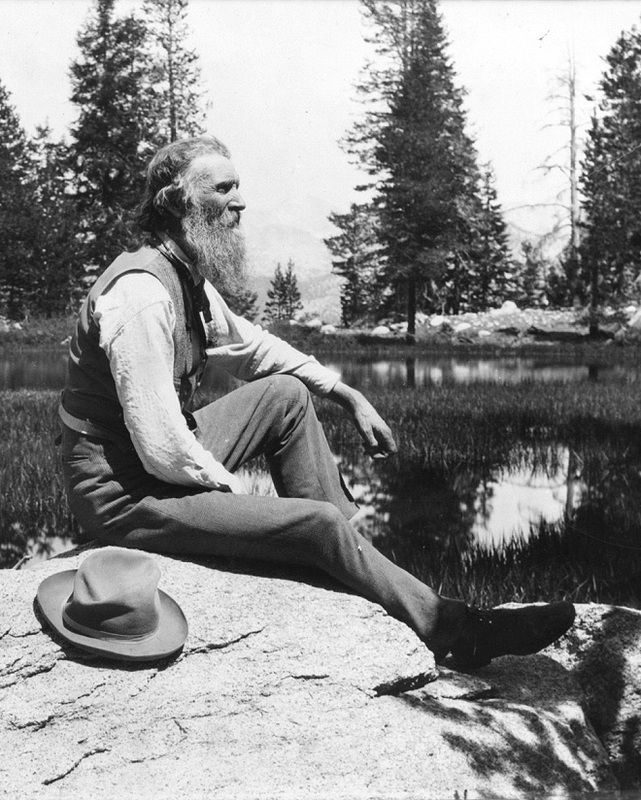 One of the first man to discover gold in the Klondike region. John Muir 1902.

So in 1880, for what we know was the year that the largest gold rush had begun. John Muir in particular was one of few men who began the series of Alaskan Gold Rushes, and also made Alaska what it is well known for today, which is the last frontier. John Muir was actually just on a canoe trip through the inside passage in 1879, and it is said that he had a certain “feeling” there would be large amounts of gold in Juneau, Alaska which is what we all know today as the capitol of the state of Alaska.  Then in 1886, John Muir made another journey but with two other men, again on a canoe but this time they randomly decided to stop to have lunch by Rabbit Creek, but during this lunch break, what they then saw was a sight that was going to give the world gold fever. With no surprise the news about the soil rich with gold took very little time for to reach the cities, but by the time people were making their way to that location the gold fields were completely claimed. Still the United States and thousands of people were willing to gamble everything they ever had on the chance of finding gold in the northlands to fulfill that dream of living a wealthy lifestyle here in the United States. This particular idea is what all of us U.S citizens know as the American Dream. 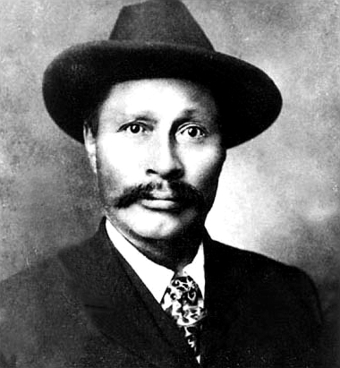 Skookum Jim, one of the discoverers, 1898

On exactly August 16, 1896, they had discovered rich gold deposits in Bonanza Creek. It is now generally accepted that Jim “Skookum” Mason had made the actual discovery, but some historians argue and say that it was Kate Carmack, Skookum's sister. George Carmack was later officially credited for the discovery because he claimed a stake with his last name. The group late then agreed to this due to the fact that they felt that other miners would be oblivious and disrespectful to recognize a claim made by a Native American because there were still very strong racist attitudes towards other ethnicities at the time. After this discovery the news spread quickly to other mining camps in the Yukon River Valley, and the Bonanza, Eldorado and Hunker Creeks. This then was the reason as to why other people rapidly staking the land by miners who had been previously working creeks and sandbars on the Fortymile and Stewart Rivers. 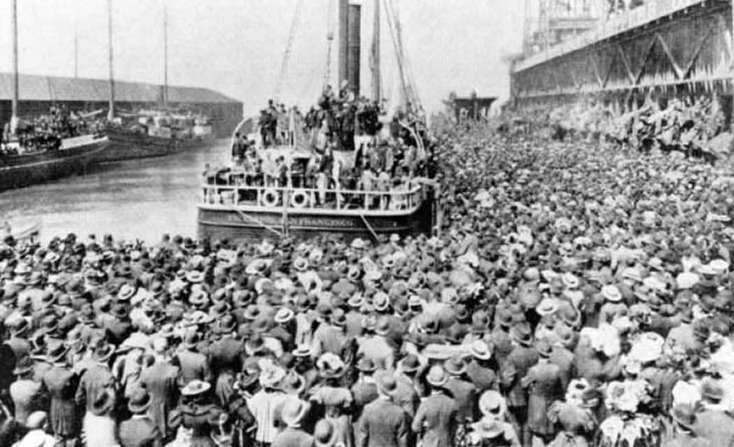 This is an image that just comes to solidfy that people were in a mad rush to the Klondike after they had heard there really was rich gold in the region.

The Klondike stampede was such a big ordeal at the time because there were an estimated amount of hundred thousand people that attempted to reach the Klondike goldfields, in which only around 30,000 to 40,000 people eventually made it to the destination where the gold was actually located. It formed the height of the Klondike gold rush from the summer of 1897 until the summer of 1898. This madness began on July 15, 1897 in San Francisco and word even reached Seattle, Washington two days later. When the first of the early prospectors returned from their treacherous journey bringing with them large amounts of gold. At the time, the press had reported that a total of $1,139,000 which is now has an equivalence to $1,000 million had been brought in by these ships alone. Even with that amount it was said that this proved to be an underestimated amount. The migration of prospectors caught so much attention that it had brought many other types of people to join this trek to the Klondike such as outfitters, writers and photographers who all wanted a piece of this outstanding event. 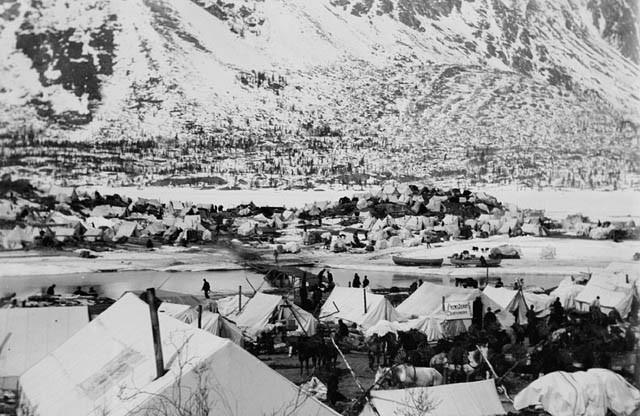 Violence was a big factor during this gold rush that had escalated during the Klondike gold rush. This then obviously led to greed and envy, which then became an everyday thing for the people of the last frontier. Prices for necessities that were brought in with difficulty had a huge inflation in price. Also, natives of the land did not like the idea of the growing population in the area because the people of the Klondike gold rush had many different methods of mining. And some of those methods were detrimental to the natural environment. At the time they clearly did not have elaborate equipment, so ways of mining were difficult. The bedrock upon which the gold was located usually was always if not frozen. To really penetrate the permafrost, miners had to burn out a shaft with wood fires. This was a tedious process of thawing, removing dirt, and then thawing again before they could finally hit the bedrock. Then the miners had to hoist the heavy gold-bearing gravel to the surface in buckets which was said was a very hard job, but during the summer months when water was available they were able to wash the gravel down in pans and sluice boxes to separate the dirt from the gold.

Many people were overwhelmed in many different feelings towards this finding of gold. People had become intoxicated, obsessed, haunted, humbled, and exalted over pieces of metal called gold. It had messed with people in very different ways and one of the ways being psychologically, Gold had motivated entire societies, torn economics to shreds, and also inspired the most beautiful works of art which was also provoked by horrible acts by one person against another. This then drove men to individual intense hardship in the hope of finding instant wealth and truly living out the American Dream. A lot of other people struck it rich without even panning for gold. For example some men realized that if all these gold-seekers would be coming to the Yukon they would need lumber for houses, food, and clothing for their families. These wise businessmen opened up stores and warehouses, which clearly allowed other men to take another path to wealth. In this way, the gold rush had it’s effect on our economy because people not only made a fortune finding gold but also those who did the background work in order to help those search for gold. 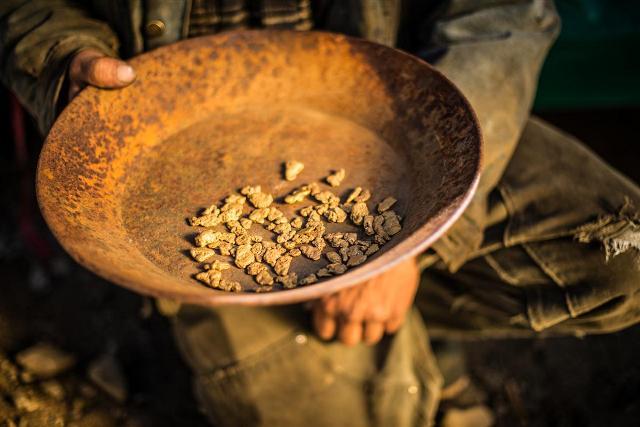 Through my research, I was able to solidify the point that the Klondike Gold Rush had a significant impact on our countries economy. Not only in a way that those who went searching for the gold may have became rich but also what it did for the overall community. Such as the example of people building shops that had equipment to make the trek to the Klondike. The stories and journeys of Klondike miners of the last frontier are endless and very interesting. Each one of them is very unique in its own way but one thing they do have in common is the greed for wealth and the want to live the American Dream. From 1880 till the early 1900s southeastern Alaska produced nearly more than 17 million two hundred and seventy-six thousand dollars in gold. Many miners had searched for gold in Alaska, but, in the long run, less than ten percent of them actually struck it rich. The Alaskan Gold Strike changed the lives of many people in good and bad ways. As money and greed often do. History and literary authors never tire of depicting the hustle and bustle of panning for gold. The elation and sometimes-great disappointment always makes for an interesting topic to research and discuss.