The Outlook of Drug Addiction in America - Blake Eide 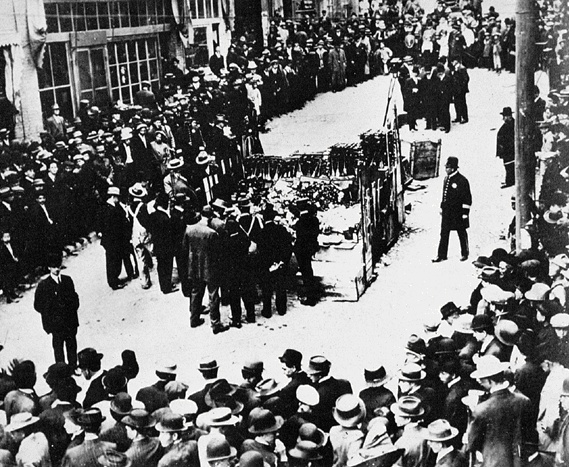 The Government during the Gilded age was trying to combat drug addiction because large amount of labor immigrants from all over the world would come to the United States looking for a better life. This typically turned into men working hard long hours, without benefits or safety concerns. This caused a large amount of these immigrants to become addicted to drugs, because it was the only way to relief and get through the strain of working 15 plus hour days. This is where the use of the drug opium escalated exponentially in the United States, causing the government to become strongly against the drug, blaming immigrants for the increase in use in the United States. This directly led to the Opium Exclusion Act of 1909, which banned opium, and made it illegal to use in America.

Advertisement in 1900 that was posted in a newspaper.

The Union army during the Civil War had a large supply of Morphine because of its world trade benefits, and this directly caused a large majority of soldiers to become addicted. On the battle field this was one of the only drugs available, and no one knew how addictive these could be. These were the most reliable drugs during this era, so doctors prescribed these addictive drugs to soldiers for pain relieve and diarrhoea. Because of the fact that these two drugs were the only viable options, they were also prescribed for stomach ache, gallstones, headaches, haemorrhoids, tetanus, typhus, syphilis, and neuralgia. (Drug Addiction in Civil War) This is why so many soldiers returned from war addicted to morphine or opiates because of the large scale use for almost any medical need. This started drug addiction in America, and is a major role in why America tried to draw away from addiction at any cost. 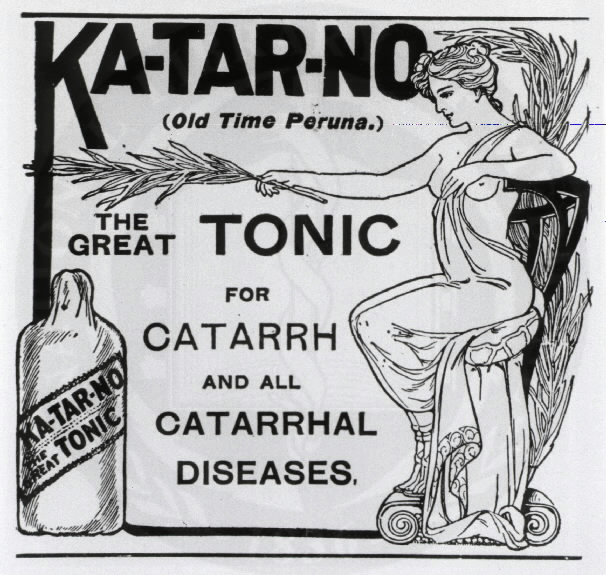 An advertisment for the remedy Ka-Tar-No, promising the cure to all Catarrh diseases.

Prior to the Pure Food and Drug Act of 1906, contents of over the counter drugs were unregulated mostly unknown, so it was easy to get hooked on something that you never really needed. Through opium dens, prostitution houses, and offices of doctors, Americans were able to satisfy their new need and desire for drugs. (dictionary of Gilded age) As one of the primary sources show, it was not out of the ordinary for a drug during this time to promise to cure certain diseases. The medical knowledge at this time was very murky for anyone not knowledgeable, so the public believed it. Americans purchased and consumed any drug that promised a fix to their ailment, which started Americans dependency on prescription drugs. This directly had an affect on the start of drug addiction during the gilded age. This directly affected America’s outlook on addiction as a crime, because it was associated with degenerates, prostitutes, and criminals. 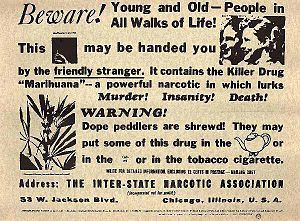 This is an advertisement from 1930 waring the public about the serious side affect of the drug known as Marijuana.

Looking at the different classifications of drug addiction and using this information to track roots of issue. I used this source to guide me through social ideas toward drug addiction and use. This adversement proves how unaware the United States was of the affects of drugs, and how the government tried to use scare tactics. America as a country has strived to keep a positive image, and always looked to drug prohibition as a way to keep it. Classifying drug use and addiction as something that only a criminal or degenerate would happen to. This lifestyle has always been associated with criminal activity, and is why the United States government is so strongly against the legalization and treating addiction as a health problem.

Since the Civil War drug addiction has been seen as a crime, and in my opinion backed by my sources, I believe it is the wrong way to look at the problem. As these primary sources prove, the Government during the Gilded age was trying to combat drug addiction with false information. This was true because a large amount of labor immigrants from all over the world would come to the United States looking for a better life, and would be blammed for bringing in "killer" drugs. This has led to America seiing drug addiction as a crime, and not a health problem that can be fixed with the right help.