During the Gilded Age and the following Progressive Era in the United States, leisure and entertainment took on new forms from prior eras in the country’s history. Compared to the Victorian Era, it was now becoming socially acceptable for men and women to pursue happiness outside of traditional family values and stodgy social parties for the rich. Instead, the middle and working class members began to spend money on motion pictures, automobiles, and entertainment in the form of sporting events. During this time, basketball, baseball and football were rapidly expanding in their appeal to the common man.

Baseball in particular established a stronghold over the American people. During this time period, most players operated on a year-to-year basis with their clubs. Contracts were moderate and many players were forced to work off-season jobs in order to support their families and their lifestyles. Thanks to an option called the “reserve rule” or “reserve clause” and after the cooperation between the National and American Leagues was established, players were not granted the rights of free agency that professional athletes today see at the completion of their contracts. Instead, the teams were given exclusive-rights to negotiate with their own players. Prior to the adoption of the clause, it was not uncommon for teams to poach the best players from each other, even midseason. Some players would end up switching teams multiple times during a single season in search of the best offer from the owners. After the clause, the teams had a “gentleman’s agreement” to not try to pry star players away from their current teams. These contract discussions also were not true negotiations, in that the teams had the right to set the player’s contract at whatever rate the team desired regardless of the player’s production. Although the reserve clause was initially praised by both the players and the team owners as a way to eliminate players jumping from team to team during midseason, the players soon came to realize that it also limited their power when it came to contract negotiations with the owners. Per the reserve clause, the owners had exclusive rights to their players and could set the contract rate at whatever pay they wanted, including issuing pay cuts even when the player exceeded expectations. The players were forced to either play for insulting contract offer or retire from professional baseball.

Much like the working class in other labor industries, the players began to organize unions in an attempt to eliminate the reserve clause. Most of the unions failed in their negotiations with the owners and dissipated. However, in 1885 John Montgomery Ward headed up the Brotherhood of Professional Baseball Players, which was the first influential union in the history of baseball. John Montgomery Ward, star shortstop for the New York Giants and union head of The Brotherhood of Professional Baseball Players.

In 1885, Ward was the star shortstop for the New York Giants. He publically denounced the reserve clause, which he had also publically supported in a book he had written. Ward, who was also a Columbia-educated lawyer, was frustrated that the clause had expanded beyond its inital use. The reserve clause was meant to be limited to five players per team, but the owners had expanded it to include all players on all teams, effectively controlling each player's careers. The players were locked into playing either for whatever salary the owners' deemed acceptable or not at all.

Ward founded the first union, the Brotherhood of Professional Baseball Players, which in turn founded its own league, The Player's League in 1890 after a few unfruitful years in negotiations with the owners. The league took with them essentially half of the National League's rosters to their new teams.

However, with three leagues (National, Player's and American Association) attendance and revenues dropped far too low and the Player's League was forced to fold and its players returned to their previous teams. The National League did grant some concessions that the players had requested, but the reserve clause remained in use for all players during this time. 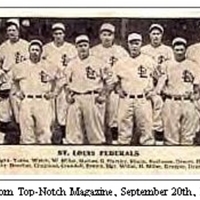 Official baseball of the Federal League

In 1914, a new challenger arose as the Federal League was established to compete against the National and American Leagues as another major league in baseball. The owners in the new league lured established stars and budding prospects by promising the players the right to become free agents (no reserve clause) and offered large salaries to the players. The Federal League managed to sign up 81 former professional players and even convinced 18 current players to switch leagues. For two seasons the league held its own against the two stalwart leagues as the upstart Federal League managed to establish eight franchises across the country. The National and American Leagues were forced to recognize the Fraternity of Professional Base Ball Players of America and acquiesced to a few of their demands. Among the changes made to the leagues were the owners would now pay for the uniforms and their upkeep instead of holding the players responsible for their jerseys, outfield fences would be painted dark green for better visibility for the batters, and increased salaries for players who had remained loyal and didn’t switch over to the Federal League.

The Federal League owners began to lose money after the American and National Leagues instituted these changes and became desperate. The owners went to a Chicago federal judge and asked for an antitrust injunction against organized baseball, claiming that the policies of blacklisting rebellious players and the reserve clause maintained by the American and National leagues were in restraint of trade. The judge was Kenesaw Mountain Landis, who would later become MLB’s first commissioner in 1920. Landis refused to rule on the case, hoping that the matter would be settled out of court. Eventually the owners of the three leagues agreed to meet up weeks later and settled the matter. The Federal League owners withdrew their suit and were awarded cash, a franchise, and the right to sell back the players they had signed to their original teams. The Federal League folded, but the reserve clause continued to exist in its current form without any amendments.

After the Federal League folded, there have been no more rival leagues that have challenged the supremacy of the American and National Leagues. Without a rival to challenge the incumbents, the despised reserve clause limited the players’ salaries and created much discontent and grumbling. Furthermore, the owners had no desire to abolish the clause as it greatly benefited them in being able to limit players’ salaries and had almost no fear of losing stars to another team. It wouldn’t be until 1975 that the players were able to finally abolish the reserve clause and establish true free agency.

Even though the reserve clause has ended in name, teams still manage to maintain control over the players they sign as amateurs or drafted for up to 12 years.  When a player signs a contract, he is assigned to a minor-league team in the “farm system”. Under Rule V stipulations, minor league players must be moved to the 40-man roster within three years if they were signed when they were young, or two years if signed when older. Players who were not promoted to major-league rosters after this time period are granted minor-league free agency, as are players who have accumulated sufficient minor-league service time. If a player reaches the majors, the team has six years of team-friendly control. The player is allowed to ask for salary arbitration during this time period, and the collective bargaining agreement establishes fair pay for the players, but technically, an 18-year-old player in this system could potentially not be a free agent until he is 30-years-old.

← How does baseball reflect the American Culture
Adam Desai Labor Relations in Baseball at the Turn of the Century →
Sports
Kevin Fisher: Baseball's Reserve Clause