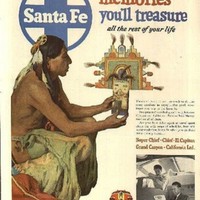 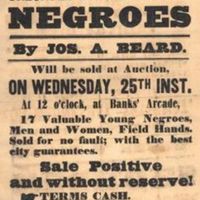 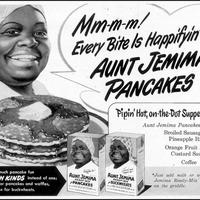 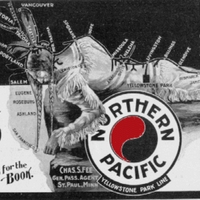 Early American advertising played a vital role the development of modern America. Although what is considered “modern advertising” did not start taking shape until the 1920’s, the advertising of the late 1800’s played a key role in the creation of stereotypes and images still portrayed in advertising today. This research focuses primarily on the representation of Native Americans and Blacks in American Advertising.

The portrayal of Native Americans became extremely popular during the rise of railroads. As travel to the West opened up, so did the opportunity for Native Americans to be further exploited through Advertising. Southern Pacific advertised travel through “Apacheland” to reach California, the advertisement highlighted a band of Indians riding their horses with rifles in hand (O’Barr 1994). Rock Island railway would travel through the “weirdly beautiful” Apache Trail to California (O’Barr 1994). The Santa Fe line put Native Americans and side show attractions in the same ring. “Gee, we are going to see real, live Indians” one ad said (O’Barr 1994). Both the Santa Fe and Southern Pacific boasted that visitors could safely visit these strange people safely up to five times a day, and even with a guide (O’Barr 1994).

Blacks first interactions with advertising began with slave advertisements. “During the eighteenth and Nineteenth centuries, it was common practice for owners of runaway slaves to place classified advertisements in local and regional newspapers, in much the same way that ads for “lost” articles or items, particularly animals, are placed today” (Kern-Foxworth 1994). A physical description was provided to make these runaway slaves easier to spot (Kern-Foxworth 1994).

With the end of slavery come the increase of Blacks portrayed in advertising; advertisements enabled the nation to promote stereotypes of the docile and humble servant (Kern-Foxworth 1994). These are only two of many stereotypes portrayed through advertising, others include:

One industry that used these stereotypes to its advantage was the food industry. There are many brands that have thrived from the “happy black face” on its label, including Uncle Ben’s Rice and the most successful, Aunt Jemima’s Pancakes (Kern-Foxworth 1994). After its creation by Chris L. Rutt and Charles G. Underwood, their product needed a symbol to make the product recognizable to all households (Kern-Foxworth 1994). While visiting a vaudeville house in St. Joseph Missouri, Rutt saw a blackface group preforming “Aunt Jemima” dressed in aprons and red bandanas channeling the traditional Southern cook. Rutt used both the song and the group’s look to create Aunt Jemima, the first living person to personify a brand trademark (Kern-Foxworth 1994). Since her creation, Aunt Jemima has helped reaffirm Black stereotypes in advertising. She acts as the happy slave, devout servant, and natural born cook (Kern-Foxworth 1994). This character furthers these by speaking in the broken and irregular English known as “slave speak” (Kern-Foxworth 1994).