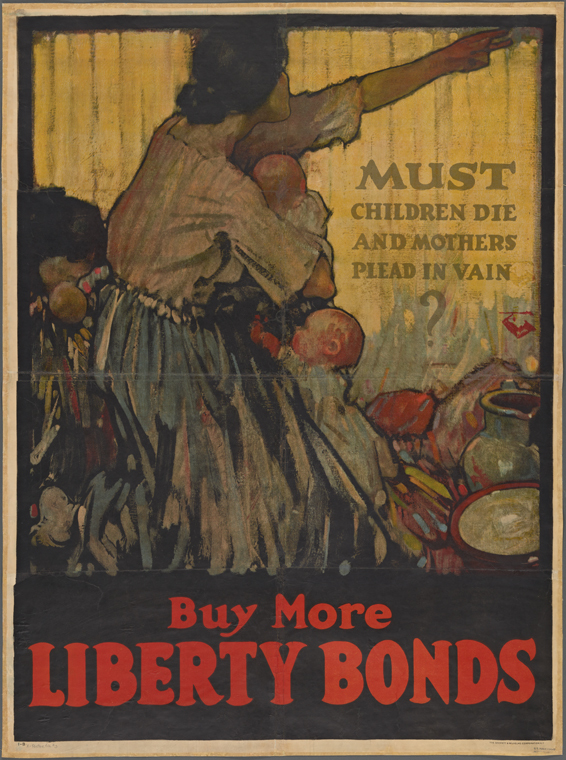 As the conflict in Europe escalated, tensions in public support for and against entering the war rose as well. Some citizens were very much for preparing for an armed conflict, as they saw that the U.S. was not as isolated as they once thought. Others still stood by the ideals of neutralism, and wanted to avoid all conflict with European nations. However most importantly, President Wilson, who ran for his second term as president on slogans promoting neutrality and keeping America out of war in Europe, saw more and more the necessity of pushing for military preparedness. In most wars that the United States have fought in, the president has needs to go to congress and ask for a declaration of war. In order for congress to approve the request, the people’s support of the conflict, in many cases, is needed. This is why the use of propaganda played a major factor in turning the American peoples support from the policy of strict neutralism, into pro war. Throughout the First World War, propaganda was integral in gaining and maintaining support for the war. Through new technologies of the time such as recorded audio and motion pictures, propaganda was able to captivate, motivate and activate a frightened American public. More conventional propaganda posters were also a major component in persuading Americans, through particular tactics, to either join the military, donate bonds, or even use less resources for their own families in efforts to conserve them for the war effort. 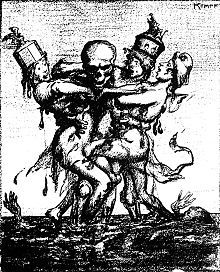 Come on in, America, the blood's fine

before the war propaganda took a different shape. Before conflict sparked in Europe, the late 1800’s was a time of labor unrest in United States. Due to injustices of working conditions in capitalistic industries across the nation, labor unions started to form and strike. Those men and women who made up the labor unions just happened to make up a sizable portion of the population. Also, because many of these low wage workers were immigrants or even second generation immigrants of Europe, they brought with them socialistic ideals. When conflict sparked in Europe, labor unions with socialist ideals took the side of anti-war. Supporting the war would support capitalism, and capitalism is what they have been fighting against as labor unions for decades now . Not only that, the socialist party had become a legitimate threat to other U.S. political parties. In every presidential election from 1900 to 1912, the labor leader Eugene Debs had run on the American Socialist Party ticket, receiving close to a million votes in 1912. Needless to say, anti-war sentiment had public support, and political cartoons were reflected in tabloids and newspapers during the time leading up to the war. Newspapers like the New York Times, New York Herald, Metropolitan, New York Tribune Review, American Editorial Page and the Bystander advocated through their cartoons and others medium, negative sentiment that some Americans against entering into a blood bath that was the First World War. Artists like Nelson Harding, Herbert Johnson, Wilmot Lunt, Edwin Marcus, Bernard Partridge, Windsor McCay and W.A. Rogers had all contributed to the anti-German sentiment that was perpetuated thought the United States because of their persuasive and sometimes graphic drawings. Windsor McCay’s work was particularly graphic in nature as is illustrated the death toll of war. His cartoon, named, “His Best Customer,” showed the grim reaper, shopping at a butcher shop. But instead of the butcher having hogs, he had humans. Also, the butcher was wearing a protective battle helmet and was labeled “war.” Another cartoon, by M.A. Kempf, showed a skeleton in a pool of blood, and the skeleton holding onto three terrified half naked women, as if the skeleton is about to pull them into the pool of blood. The caption read, “Come on in, America, the blood’s fine.” Other cartoons continued to blame big business for pushing towards entry to the war. It was not hard to draw the lines from a large war to huge profits in business. Even in the beginning of the war, President Wilson was significantly assisting the British forces with equipment and materials to continue to fight the war. There is no doubt that large businesses were profiting from that. One cartoon showed a large tree full of skulls labeled “war,” and beneath it were the roots shown to be growing from bags of big business money labeled, “profits.” Next to the tree stood the typical “Fat Cat” eagerly peering onto the growing tree. The socialist party, in many eyes, needed to be put into the ground. Proof of the main political parties becoming frightened of the traction that the Socialist party, led by Eugene Debs, was gaining; the Espionage Act of 1917 was passed. The act was passed to prevent spying but also contained a section which criminalized inciting or attempting to incite any mutiny, desertion, or refusal of duty in the armed forces, punishable with a fine of not more than $10,000, not more than twenty years in federal prison, or both. It was then used to prosecute thousands of anti-war activists and disgruntled citizens. Most notably, the act was used to prosecute Eugene Debs for an anti-war speech in Ohio. This unconstitutional tactic was relatively successful in subduing anti-war sentiment.  Despite the massive amount of support for neutralism, events transpired to shift the countries support. 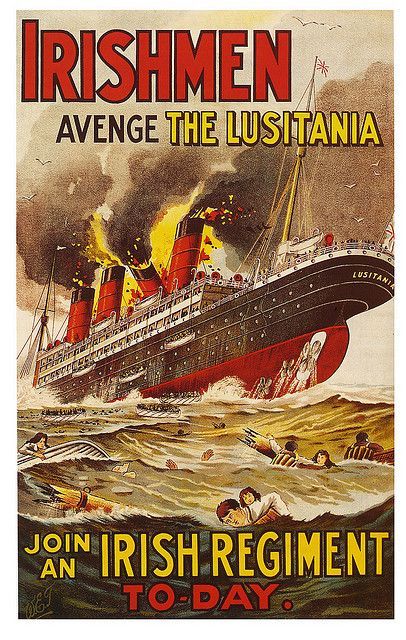 Events like the Zimmerman telegram, unrestricted submarine warfare by the Germans and the sinking of the U.S. passenger ship the “Lusitania,” all accumulated to the eventual United States declaration of war on Germany. Unrestricted submarine warfare was declared by the Germans in 1915 around the British Iles. This meant that the Germans would sink anything they saw floating on the water’s surface.  This included all ships not to exclude neutral partied passenger and merchant ships. One of the reasons that they did this was to prevent enemy countries from getting cargo and supplies to fight the war. For example, the United States maintained neutrality in order to still trade with whomever they wanted. This included both the Entente allies and the German allies. Once declared, the German U-boats sunk a significant amount of merchant ships from different nations which proved to enrage the United States. On May 17th 1915, the Germans sunk a British passenger ship the Lusitania. During the attack, 1,201 drowned, 128 of those who died were Americans.  The Germans justified the attack by saying that the ship was British and that there was cargo and supplies on board for the war effort, both where true. Regardless, the American people were outraged when word got back to the United States. Propaganda cartoons riddled the tabloids. One showing a skeleton with a Germans army helmet on lifting the Lusitania out of the water. Despite the fact that the ship was British, the American media did its best to sensationalize the event, which in turn made a massive shift in